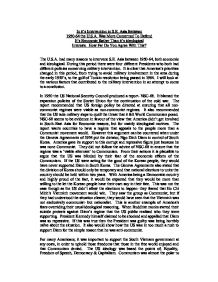 In it's Intervention in S.E. Asia Between 1950-64 the U.S.A. Was More Concerned To Defend It's Economic Rather Than it's ideologicalInterests. How Far Do You Agree With This?

In it's Intervention in S.E. Asia Between 1950-64 the U.S.A. Was More Concerned To Defend It's Economic Rather Than it's ideological Interests. How Far Do You Agree With This? The U.S.A. had many reasons to intervene S.E. Asia between 1950-64, both economic and ideological. During this period there were four different Presidents who both had different policies concerning military intervention. It is clear that America's priorities changed in this period, from trying to avoid military involvement in the area during the early 1950's, to the gulf of Tonkin resolution being passed in 1964. I will look at the various factors that contributed to the military intervention in an attempt to come to a conclusion. ...read more.

America gave its support to this corrupt and repressive figure just because he was none Communist. They did not follow the advice of NSC-68 in ensure that the regime was a 'viable alternate' to Communism. From their actions it is plausible to argue that the US was blinded by their fear of the economic effects of the Communism. If the US were acting for the good of the Korean people, they would have never supported Diem in South Korea. The Geneva Agreements also stated that the division of Korea should only be temporary and that national elections to unite the country should be held within two years. ...read more.

If this was true then the President was guilty was being horribly na�ve about the situation. It also would show how the US was in too much a rush to support Diem for the simple reason that he was anti-communist. For many Americans, it was important to support the South Vietnam government at any costs, in order to uphold those freedoms that those in the free world enjoyed and that Communism denied. The US ideology was based the points of; Equality, Freedom of Speech, Democracy & Capitalism. Communism was almost the polar to these ideas. That is was Communism went against what many Americans themselves really believed in. As the major power in the world the US could have seen it as their duty to ensure that they supported Countries unable to stop themselves being taken over by an ideology that repulsed America. ...read more.