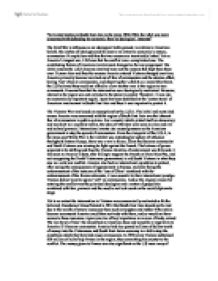 &quot;In its intervention in South East Asia in the years 1950-1964, the USA was more concerned with defending its economic, than its ideological, interests&quot;

"In its intervention in South East Asia in the years 1950-1964, the USA was more concerned with defending its economic, than its ideological, interests" The Cold War is infamous as an ideological battle ground, in relation to American beliefs, the clashes of ideology could be seen to an extent as economic in nature; communism Vs capitalism and thus the two reasons are inextricably linked. Yet as America's longest war, it follows that the conflict was a complicated one. The contributing factors of American involvement changed as the war progressed. The initial reasons the U.S.A became involved were not the reasons that kept them there over 15 years later and thus the reasons America entered Vietnam changed over time. America primarily became involved out of fear of communism and the domino effect, having 'lost' china to communism, and observing the U.S.S.R as a monolithic threat, the U.S believed they could not afford to allow another area in the region to turn communist. ...read more.

Truman did not want to appear 'soft' on communism. And so the original reason for entering the conflict was the polarised ideologies and a matter of geopolitics combined with fear, paranoia and the need to not look weak on the world diplomatic stage. Yet to an extent the intervention in Vietnam was economically motivated as Kolko believed; Eisenhower himself stated in 1954 that South East Asia should not be lost due to the wealth of natural resources there such as tungsten and rubber If the nation became communist America could then not trade with them, and so would not have access to these resources. Japan was also of key importance as an area of trade; coined 'the rice bowl of Asia' the island had an American base and would be a large blow to America if it became communist. America had also poured millions of dollars worth of money into the Vietnamese and South East Asian economy in a bid to stop the conditions which they believed cause communism. ...read more.

This began as early as the 1950s; after deciding not to support the decisions made at Geneva and splitting Vietnam literally down the 17th parallel, America were committed to upholding and maintaining the situation they had helped create, withdrawing aid and advisement would make the nation look weak and unfair, as Westmoreland later stated they had become 'Morally locked into Vietnam'. This idea of being morally accountable progressed the further in America got, the more troops that were sent, the more damage, the more lives lost and the worse America would seem internationally. No president wanted to be seen as the one who 'lost Vietnam' and so the quagmire theory has been propounded by many historians; each president was obligated by the actions of those before him and this graduated commitment made it harder to get out of the 'quagmire'. Prestige and credibility played a huge role, not only international but within their own country. Domestic pressure International pressure Fear of embarrassment Situation by 1964 conclusion ...read more.