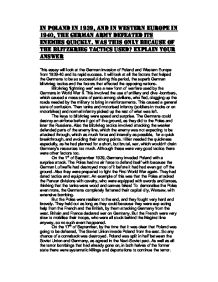 In Poland in 1939, and in Western Europe in 1940, the German army defeated its enemies quickly. Was this only because of the blitzkrieg tactics used? Explain your answer.

In Poland in 1939, and in Western Europe in 1940, the German army defeated its enemies quickly. Was this only because of the blitzkrieg tactics used? Explain your answer This essay will look at the German invasion of Poland and Western Europe from 1939-40 and its rapid success. It will look at all the factors that helped the Germans to be so successful during this period, the superb German blitzkrieg tactics and the factors that effected the opposing nations. Blitzkrieg 'lightning war' was a new form of warfare used by the Germans in World War II. This involved the use of artillery and dive-bombers, which caused a mass state of panic among civilians, who fled, clogging up the roads needed by the military to bring in reinforcements. This caused a general state of confusion. Then tanks and motorised infantry (soldiers in trucks or on motorbikes) and normal infantry picked up the rest of what was left. The keys to blitzkrieg were speed and surprise. The Germans could destroy an airforce before it got off the ground, as they did to the Poles and later the Russians. ...read more.

The French did better, they sent soldiers with skis, but the skis had no straps, so they were useless. Unsurprisingly the allies achieved nothing, and soon went back home again. So the help from the allies was again useless. There were many reasons why the Germans were successful in France. One of which was down to the brilliant quality of the German troops, who were very well trained and dedicated. But most of which were caused by France's own ignorance. They were very overconfident and complacent. To start with the French sent forty of its best divisions in the wrong direction. These were sent to cut a German attack through north-west Belgium, which never happened. Instead the Germans attacked through the Ardennes forest in the south of Belgium, which lead to a part or the French boarder with no Maginot line and only ten of the worst divisions to defend it, it was certainly the weakest defended point of the boarder. It was defended so poorly because the French refused to believe that a whole army with tanks and artillery could pass through the Ardennes forest. ...read more.

Another reason that the Germans were so successful was the small amount of help supplied by the British. France mobilised six million men, and we only supplied just over two hundred thousand, which was simply just not enough. This confirmed France's fear, that Britain wasn't taking the war seriously. This essay has shown that the German army was a large, well-trained and organised machine, with dedicated soldiers. Also it has shown that the blitzkrieg tactics were good and very effective. This is supported by Russia's poor attempt to invade Finland in 1940, not using blitzkrieg tactics. But they did eventually win due to superior numbers, which the Germans also had, compared to their opponents at any one place and time. Also the speed of the German attacks throughout Europe took did help to defeat armies, who were surprised by it the speed and opportunism of the attacks. But also it has shown that their opponents were unprepared, with out of date tactics and equipment, and out of touch leaders. Germany on the other hand was well prepared, with modern tactics and equipment, and had strong leaders with modern ideas. So after all of this, it is clear that blitzkrieg tactics helped the Germans a lot, but were not the only reason for their success. ...read more.