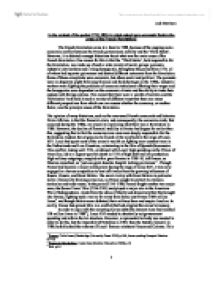 'In the context of the period 1715-1815 to what extent were economic factors the cause of the French Revolution?'

In the context of the period 1715-1815, to what extent were economic factors the cause of the French Revolution? The French Revolution came to a head in 1789, because of the ongoing socio-economic conflict between the French government, nobility and the 'Third Estate'. However, it is debated amongst historians about what was the main cause of the French Revolution. One reason for this is that the 'Third Estate', held responsible for the Revolution, was made up of such a wide variety of social groups: peasants, industrial city workers and a rising bourgeoisie, throughout the period from 1715, all of whom had separate grievances and desired different outcomes from the Revolution. Some of these complaints were economic, but others social and political. The peasants were in desperate plight following famines and food shortages in the 1780s, industrial workers were fighting the problems of economic turbulence affecting their wages and the bourgeoisie were dependent on the economic climate and the ability to trade their outputs with foreign nations. This meant that there were a wealth of motives and the 'Revolution' took hold in such a variety of different ways that there are many different perspectives from which one can assess whether the economy, or another factor, was the principle cause of the Revolution. The opinion of many historians, such as the renowned French economist and historian Florin Aftalion, is that the financial crisis, and consequently, the economic crash, that occurred during the 1780s, are crucial to explaining why there was a Revolution in 1789. However, the decline of financial stability in France had begun far earlier than this, suggesting that in fact the economy was even more deeply responsible for the Revolution. Indeed, the origins can be traced all the way back to the reign of Louis XIV. Louis had spent most of the crown's wealth on fighting near-constant wars in the Netherlands and Low Countries, culminating in the War of Spanish Succession. ...read more.

Some historians, like Fran�ois Furet, went still further. In his works and those of contemporary historians, it was widely believed that the French Revolution could be almost directly derived from the Enlightenment movement of the mid-1700s8. Philosophers such as Voltaire argued for freedom of speech, religion, and to 'crush the infamy'9 of the ancien regime and its absolute monarchy. This 'infamy' was summed up by Jean-Jacques Rousseau: 'Man is born free, and everywhere he is in chains'10. Montesquieu, in his 'L'Espirit des Lois'11, argued that 'the people, in whom the supreme power resides, ought to have the management of everything within their reach'12, and it is easy to draw parallels between the ideas of the Enlightenment and the freedoms that the leaders of the Revolution sought to give themselves by toppling the ancien r�gime. Indeed, since the 1750s, the parlements had justified their opposition to ministers, and to Louis XV's royal authority, by citing the works of Montesquieu and Rousseau. There has long been debate, however, about how much the work of Enlightenment philosophers contributed to the mindset of the Revolutionaries. One contemporary school of thought, led by Edmund Burke, established a close connection between philosophy and the Revolution. Later generations of theorists, though in conflict with Burke about the effectiveness of the Enlightenment, agreed that it was a crucial factor in bringing about the Revolution. Alexis de Tocqueville's 'Old Regime and the Revolution' states that the Revolution's main aim was to create an equality-based social and political order13, thus the Enlightenment was the main motive behind the Revolution. This would appear to concur with Robespierre's speech to the National Convention in 1794, where he argued that the new French Republic should be a place 'where the citizen is subject to the magistrate, the magistrate to the people, and the people to justice'14. This clearly shows an influence of Enlightenment theory on Robespierre. The French role in the American War of Independence caused an influx of new ideas into French society. ...read more.

As Charles Barentin (Louis XVI's Keeper of the Seals) wrote to him in 1789, the National Assembly displayed 'contempt for Your Majesty's wishes', suggesting 'they must be maintained'27. At least one faction of government, then, had the impression that the Third Estate could be highly dangerous, fuelled by the years of oppression at the hands of the higher society. However, de Tocqueville argued that though the Revolution brought about liberty and democracy, it did not bring about equality. This idea is justified when one considers that the Revolution was declared 'over' in 1799 by Napoleon, and his widely popular dicatorship began, suggesting that the Third Estate were less concerned about gaining equality and more about simply removing what they saw as dissatisfactory governments, both of Louis XVI, and later of the National Assembly. The evidence put forward by historians citing the economy as the main cause of the Revolution clearly shows that the French finances were in such a bad way that the monarchy was ill-equipped to govern France, or to defend itself against the Revolution in 1789. However, I believe that the causes of the Revolution were more than merely economic. I would agree with Marxist historians' view that not only the economy, but also a change in the demography of France meant that a feudal-based, autocratic society could simply no longer function. Other events post-1789 would support this view: the destruction of Napoleon's autocracy in 1815, the passing of the Great Reform Act in Britain, the establishment of the United States, and the eventual overthrow of Russian Tsarism are all strong evidence that the Western World had fallen out of favour with autocracy, that the working class did have sufficient strength to effect constitutional change and that the ideals of democracy were what eighteenth-century Europeans really wanted. It is possible that economic strife and famine were what was needed to trigger active Revolution based on much longer-term discontent, but in general terms I believe the foundations of the Revolution were much wider, based in French society's intrinsic failures and the changing shape of Western society. ...read more.