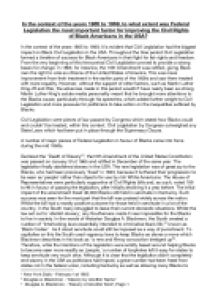 In the context of the years 1865 to 1969, to what extent was Federal Legislation the most important factor for improving the Civil Rights of Black Americans in the USA? (Extract)

﻿In the context of the years 1865 to 1969, to what extent was Federal Legislation the most important factor for improving the Civil Rights of Black Americans in the USA? In the context of the years 1865 to 1969, it is evident that Civil Legislation had the biggest impact on Black Civil Legislation in the USA. Throughout the time period Civil Legislation formed a timeline of success for Black Americans in their fight for fair rights and freedom. From the very beginning of this time period Civil Legislation proved to provide a strong bases for change. In 1869, for instance, the 15th Amendment was ratified, giving Black men the right to vote as citizens of the United States of America. This was mass improvement from their treatment in the earlier parts of the 1800s and saw them treated with more equality. ...read more.

The legislation finally abolished slavery in the USA. The new legislation was of great joy to the Blacks, who had been previously ?freed? in 1863, because it furthered their progression to be seen as ?people? rather than objects for use by rich White Americans. The House of Representatives were particularly supportive of Civil Rights bills and, as such, voted 199 to 96 in favour of passing the legislation, after initially declining it a year before. The initial impact of the amendment freed 40,000 Blacks still held in servitude in Kentucky. Such success was seen for the most part that the bill was praised widely across the nation. Whilst the bill had a mostly positive outcome for those held in servitude in a lot of the country, in the South many struggled to leave their current domestic situations. ...read more.

Therefore, without the legislation being passed the presence of slavery would have continued and preserved to continue much long that in reality. However, it is important to note that, whilst the legislation in its own right improve lives, its implementation was arguably put down to President Abraham Lincoln. While his political astuteness gave him the intelligence to stay out of the way while the legislation was considered; he ?let it be known that he favoured it?[4] and he ?vigorously backed it in the struggle in the House of Representatives?[5] when it was first released. (NOT SURE ABOUT THIS PART?) ________________ [1] New York Daily - February 1st 1865 [2] Douglas A. Blackmon - ?Slavery by Another Name? [3] Douglas A. Blackmon - ?Slavery of Another Kind?, Page 1 [4] Charles A. Dana, Recollections of the Civil War, p. 174-177 [5] Charles A. Dana, Recollections of the Civil War, p. 174-177. ...read more.