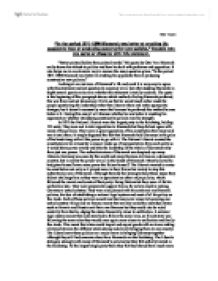 &quot;In the period 1871-1890 Bismarck was better at crushing his opponents than at producing constructive new policies.&quot; Explain why you agree or disagree with this statement.

Peter Towell "In the period 1871-1890 Bismarck was better at crushing his opponents than at producing constructive new policies." Explain why you agree or disagree with this statement. "Better-pointed bullets than pointed words," this quote by Otto Von Bismarck really shows his attitude to politics and how he dealt with problems and opposition. It also helps me in an extensive way to answer the essay question given. "In the period 1871-1890 Bismarck was better at crushing his opponents than at producing constructive new policies." Looking at an overview of Bismarck's life and work it is very easy to agree with this statement and not question its accuracy at all, but after studying Bismarck in depth several queries arise as to whether this statement is totally accurate. The quote at the beginning of this paragraph shows which method of ruling Bismarck preferred, this was force and not democracy. It tells us that he would much rather crush the people questioning his leadership rather than listen to them and make appropriate changes, but it doesn't necessarily mean that because he preferred this method he was better at it. During this essay I will discuss whether he was better at crushing his opponents or whether introducing constructive policies was his strength. In 1871 the National Liberals were the largest party in the Reichstag, holding 155 seats. They were not in total opposition to Bismarck but they did not agree with many of his policies. They were in great opposition of his constitution that many said was a total sham. It simply disguised the fact that Bismarck held Germany in the palm of his hand along with all the power to go with it. The National Liberals wanted the constitution to be revised by a council made up of representatives from each party so it would share power evenly and take the leadership of the whole of Germany away from just one person. ...read more.

Due to this ill feeling the Germany did not rule the area locally. Instead it was ruled directly from Berlin. After 1874 the Alsatians were given the right to elect deputies into the Reichstag. Even though they were given this privilege the Alsatians felt they were being oppressed. Between the years of 1871 and 1914 400,00 people left the area to live in France. Bismarck was not happy with this mass migration of people who were meant to be part of his country, so he tried to win them back by appointing Edwin von Manteuffel as chancellor in 1879. He worked hard to improve relations between Bismarck and the Alsatians. To a certain extent he was successful, but the Alsatians were still in opposition to what they regarded as German occupation, and were particularly against the German troops occupying the area. Out of the three national minorities mentioned here Bismarck really only tried to crush one of them, which was the Poles. He was very unsuccessful in doing this and if anything he strengthened the Poles as a unit rather than dividing them. While trying to suppress the Polish nationalism he didn't actually make any constructive policies to aid Germany. This shows that although we have seen that he is successful when introducing constructive policies like he did when trying to remove the National Liberals he still prefers to crush his opponents. Although in the case of the Poles he failed miserably. In the case of the Danes he didn't actually carry out any real action to crush them or introduce any constructive policies, he simply refused to carry out a promise for them. This did give him some control of the Danes in a way but it did not crush them at all. The same can be said for the French occupants in Alsace-Lorraine, He didn't crush them in anyway; he actually tried to persuade them to stay by giving them a popular governor. ...read more.

The government and employers would fund all of these. These were ground breaking social reforms and pleased the socialists, but not enough to silence them. They still pushed for even more social reform and better working conditions. So if Bismarck was trying to get rid of them by doing this he failed, but in the process of doing so he introduced some of the best and most constructive policies of his career. These policies were totally ground breaking in Europe at the time. So much so that our present welfare system is based on these policies. W.N Medlicot said Bismarck's social policies were, "his greatest claim to statesmanship." This is very true and shows just how much better he was at introducing new policies than he was at crushing his opponents. I feel the statement; "In the period 1871-1890 Bismarck was better at crushing his opponents than at producing constructive new policies" is totally wrong. Bismarck clearly favoured the method of crushing his opposition over introducing new policies but by no means was he better at it. The only opposition he succeeded in crushing was the National Liberals and even when he did this he introduced a policy to protect Germany from depression. His other attempts to crush groups of opposition failed, including his attacks on national minorities, the church and the socialists. In contrast to these failures his constructive policies were very successful. His free trade policy made trading between Germany and other countries and between the inner states very easy. This is a factor that helped bring Germany towards unification along with his economic policies. His later policies of state socialism where so successful that they not only changed Germany at the time but have caused significant changes throughout the world right up to present day. In my opinion Bismarck was much better at producing constructive new policies than he was at crushing his opponents. This quote by the man himself, "Better-pointed bullets than pointed words" certainly shows which method he preferred, however he was much better at politics rather than ruling by an iron fist. ...read more.