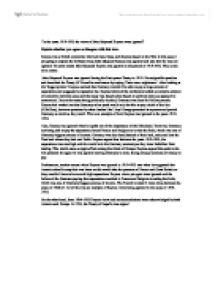 In the years 1919-1932 the views of John Maynard Keynes were ignored Explain whether you agree or disagree with this view.

Keynes had worked out that Germany at her peak would only be able to pay a third of the fine (2.2billion), however promises by other leaders like Lloyd George promised to squeeze and punish Germany as much as they could. This is an example of how Keynes was ignored in the years 1919-1932. Also, Keynes was ignored when he spoke out of the importance of the Rhineland. However, Germany not being able to pay the reparations forced France and Belgium to invade the Ruhr, which was one of Germany biggest sources of income. ...read more.

Furthermore, another reason when Keynes was ignored in 1919-1932 was when he suggested that America should scrap their war loans as this would take the pressure of France and Great Britain so they wouldn't have to have such high reparations. Keynes views yet again were ignored and the failure of the Germans paying their reparations resulted in France and Belgium invading the Ruhr, which was one of Germany biggest sources of income. The French invaded 3 more times between the years of 1920-23. All of this was an example of Keynes views being ignored in the years of 1919-1932. On the other hand, from 1924-1932 Keynes views and recommendations were acknowledged by both America and Europe. In 1922, the Treaty of Rapallo was signed ?? ?? ?? ?? ...read more.