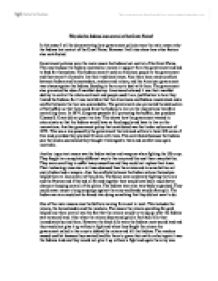 In this essay I will be demonstrating how government policies were the main reason why the Indians lost control of the Great Plains. However I will also show how other factors also contributed

They fought in a completely different way to the army and this cost them many battles. They were unwilling to suffer heavy casualties and they could not replace their loses. Their technology was also a lot less advanced than the armies and in some battles not every Indian had a weapon. Also the conflicts between the Indian nations themselves helped them to lose control of the plains. The Sioux were constantly fighting the Crow and the Pawnee and if the had all formed together they would have had a much better chance at keeping control of the plains. The Indians were also very badly organised. They could never mount a long campaign against the army and bands would often split. The Indian warriors would not be forced into doing something that they did not want to do. One of the main reasons was the Settlers moving from east to west. ...read more.

The reservations also had a big role in the Indians losing control of the Great Plains. They were very convenient to the US government because once the buffalo were destroyed, the reservations were a way that the Indians could be controlled and they would be completely dependent on Government. Also whilst on the plains the American government began to educate the children. They almost brainwashed them and when they returned they were no longer able to live their traditional ways on the Plains. One factor that didn't contribute greatly but had an impact on everything was the end of the US civil war. The veterans from the war had know nothing else but fighting and were eager for it to resume. Also they were anxious to live on the plains and the Indians days were numbered. The Government policies were the biggest reason why the Indians lost control because of Manifest Destiny, the reservations and the destruction of the buffalo. The government were to blame for the extermination of the Indians and how they lost the Great Plains. By Lewis Belcher ...read more.