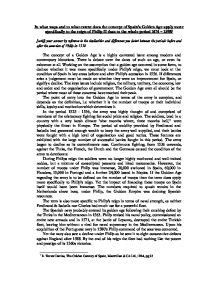 In what ways and to what extent does the concept of Spain's Golden Age apply more specifically to the reign of Philip II than to the whole period 1474 - 1598?

In what ways and to what extent does the concept of Spain's Golden Age apply more specifically to the reign of Philip II than to the whole period 1474 - 1598? Justify your answer by reference to the similarities and differences you detect between the periods before and after the accession of Philip in 1556 The concept of a Golden Age is a highly contested issue among modern and contempory historians. There is debate over the dates of such an age, or even its existence at all. Working on the assumption that a golden age occurred in some form, to deduce whether it was more specifically under Philip's reign, we must look at the condition of Spain in key areas before and after Philip's accession in 1556. If differences arise a judgement must be made on whether they were an improvement for Spain, or signify a decline. The keys issues include religion, the military, territory, the economy, law and order and the organisation of government. The Golden Age over all should be the period where most of these concerns have reached their peak. The point of entry into the Golden Age in terms of the army is complex, and depends on the definition, i.e. whether it is the number of troops or their individual skills, loyalty and motivation which determines it. In the period 1525 - 1536, the army was highly thought of and comprised of members of the aristocracy fighting for social pride and religion. ...read more.

At one point Philip was said to be the richest ruler in the world, as he had complete control over new world silver resources, and very profitable salt pans in Portugal and the Caribbean. However, his recurring bankruptcies, and incessant squandering of New World wealth on Armadas draws the conclusion that there was more of a decline than a rise in terms of the economy during Philip's reign, and therefore that the term (Golden Age) does not apply more specifically to his reign. Establishing a golden age regarding law and order is again a simpler notion to define, it being the period of fewest civil disturbances. However the question arises of whether revolts around the empire should be taken into account, or if judgement should be based purely on events in internal Spain. For the purposes of this question the former must be adopted, as unrest in other parts of the empire has a direct and indirect effect on Spain. An aim of Ferdinand and Isabella's was to create stability and order, as Spain had existed in relative lawlessness prior to this accession. A main tactic used to create this law and order was the Santa Hermandad, an organisation directly under the control of the Monarchs, and whose purpose was to dispense justice in cruel and harsh ways. It could be said that this is the point of entry into a golden age regarding law and order, as the Brotherhood was so successful it completed its task by 1498 and was disbanded. ...read more.

However as the monarchy grew more stable, and Spain took further control of Italy, the Pope's influence diminished. The Pope's were unable to prevent the Monarchs from using the Inquisition, and gradually granted more powers of appointment to the Spanish Kings. The Council of Trent gave Philip significant new powers within the Church. It is the view of Trevor Davies that by the end of the period, the church had been subordinated to the state, and the relations between Philip and the Pope were 4 'those of a non-religious statesman.' The increase in persecution, and the establishment of the Spanish Church's independence, both achieved primarily in Philip's reign, is the evidence for Spain's entrance into the religious Golden Age. At the end of Philip's reign, religion is Spain was more uniform and autonomous than ever before. To conclude, although in many of these areas do not reach a peak under Philip, or in some cases at all, it is still my conclusion that the term Golden Age does apply more specifically to Philip. This is because these issues are not equal in importance, to contemporys the most important matters would probably be religion and the empire, and in these areas Philip did experience a Golden Age that his predecessors did not. The concept of a Golden Age can happily be applied to the entire era, whereby an obscure collection of Kingdoms became a major international power, but as this took some time to complete is it probably fair to say that it was achieved towards the end of the period, rather than the beginning. ...read more.

This is an excellent response that is clearly structured, convincing and focused, with excellent evaluation of the historiography. The author is knowledgeable and supports all judgments well. 5 out of 5 stars.