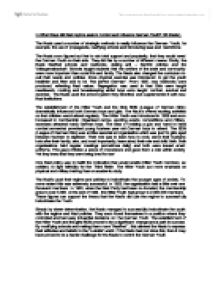 In What Ways did n**i regime seek to Control and Influence German Youth?

In What Ways did n**i regime seek to Control and Influence German Youth? (20 Marks) The Nazis used a number of strategic methods to easily influence the German Youth, for example, the use of propaganda, nazifying schools and introducing laws and restrictions. The Nazis soon figured out that to win total support and popularity, that they would need the German Youth on their side. They did this by a number of different means. Firstly, the Nazis Nazified schools and textbooks, stating anti - Semitic policies and the Volksgemainschaft. Schools taught students that the welfare of the state and community were more important than social life and family. The Nazis also changed the curriculum to suit their needs and policies. ...read more.

The n**i's offered exciting activities so that children would attend regularly. The Hitler Youth was introduced in 1926 and soon increased in membership. Organised camps, sporting events, competitions and military exercises attracted many German boys. The idea of holding a gun and hand to hand combat somewhat provoked young fourteen year old German boys to attend. The BDM (League of German Girls) was a Hitler associated organisation which was just for girls aged between fourteen to eighteen. Their role was to learn how to cook, serve their husband, look after their family, sew, and most importantly, learn about their role and child birth. Both organisations held regular meetings (sometimes daily) and both were issued smart uniforms. ...read more.

At the end of 1933, the Hitler Youth had grown to 2,300,000 members. These figures can support the theory that the n**i's did use the regime to successfully indoctrinate the Youth. Simply by sheer determination, the Nazis managed to successfully indoctrinate the youth with the regime and n**i policies. They soon found themselves in a position where they controlled and had easy influential decisions on the German Youth. The establishment of the Hitler Youth and the girls BDM proved to be a significant change and a path to success. By modifying schools and making them more "Nazified ", this allowed the Nazis to express their attitudes and beliefs to the "outside" world. If the Nazis had not done this, then it may have proved to be a harder challenge for the Nazis to control the German Youth. ...read more.