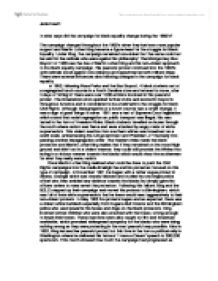 In what ways did the campaign for black equality change during the 1960's?

In what ways did the campaign for black equality change during the 1960's? The campaign changed throughout the 1960's when they had won more popular support and Martin Luther King became a figure-head for the struggle for Black Equality. Under King, the campaign remained non-violent but the same could not be said for the radicals who were against his philosophy! The Montgomery Bus Boycott of 1955 saw the rise of Martin Luther King and his non-violent approach to the black equality campaign, this peaceful protest continued into the 1960's until radicals stood against non-violence and experimented with militant ideas. There were external influences also initiating changes in the campaign for black equality. In 1960, following Rosa Parks and the Bus Boycott, 4 black students sat at a segregated lunch counter in a North Carolina store and refused to move, after 4 days of 'sitting in' there were over 1000 activists involved in this peaceful protest. The Greensboro sit-in sparked further sit-ins and economic boycotts throughout America and is considered to be a hallmark in the struggle for black Civil Rights. ...read more.

Following this failure, King and the SCLC stepped up their campaign and moved his protests to Birmingham; which was full of irate white supremacists that he knew would react aggressively to their non-violent protests. In May 1963 the protests began and as expected, there was a violent white backlash especially from Eugene Bull Connor and the Birmingham police who used powerful fire hoses and dogs on the black protestors. King involved school children who were also attacked with fire hoses, strong enough to break their bones. These reactions were also caught on film and broadcast worldwide, which provoked widespread sympathy for the blacks who were doing nothing wrong as they were protesting in the most peaceful way possible. Also in 1963, King led another peaceful protest but this time in the form a political rally in Washington where he delivered his famous 'I Have a Dream' speech to 250,000 spectators. This march showed how much the campaign had progressed as there were reportedly 50,000 whites involved, it was also broadcast across the world and aimed to support the Civil Rights Bill put forward by JF Kennedy. ...read more.

Luckily Johnson was also pro civil rights and helped the civil rights act along by passing the Civil Rights Act of 1964 in honour of Kennedy. He had 20 years experience as a senator so had great influence in congress which would ultimately work in favour of Black Civil Rights. Malcolm X, a radical civil rights activist had been actively involved in the Nation of Islam, was against King's non-violent philosophy and many young blacks joined Malcolm and his ideas. X hated the idea of mixing with white people; he didn't think blacks could develop unless they were separate. His threats worried the US Government and this was possibly a factor which contributed to the passage of the Civil Rights Act 1964; Malcolm X warned that if nothing was done in favour of blacks 'violence on a grand scale would erupt.' By 1968, the Civil Rights campaign had lost its momentum; King became weary and was then shot on his balcony in April 1968. The campaign had lost their biggest leader and with the assassination of Malcolm X even the radicals didn't have an influential leader. As a consequence, the movement didn't seem to progress any further after this. ?? ?? ?? ?? Jade Hewitt ...read more.