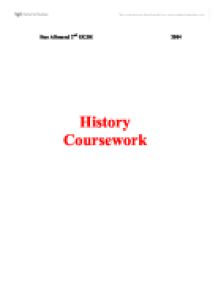 In what ways did the careers of Stalin and Trotsky differ in the years 1917 to 1924?

Ben Allmond 2nd GCSE 2004 History Coursework Question 1 Subject: In what ways did the careers of Stalin and Trotsky differ in the years 1917 to 1924? Between 1917 and 1924 there was political unrest and uprisings all over Russia. Two main figures in these conflicts were Trotsky and Stalin. Trotsky was in New York, where he wrote for a Menshevik newspaper, when the March revolution of 1917 started. Stalin had always been in Russia and he was editing a Bolshevik newspaper called "Pravda" (meaning truth in Russian). At this point both of these men did not have greatly different job, they were both working in Russian newspaper companies. When Trotsky arrived back in Russia in May 1917, he quickly assumed leadership of the independent Left Social-Democratic Interdistrict Group, and joined the Petrograd Soviet. Within weeks, he had gained great popularity as the most eloquent agitator of the Soviet left. Stalin came into the limelight on the 12 of March 1917 when the Russian Bureau of the Central Committee co-opted him as one of their members. They only gave him a consulting vote because they thought that he was a rough diamond, just as Lenin believed and wrote in his "Testament". ...read more.

Later he became the commissar of war where he directed the Red Army to a great victory in the civil war and saved the revolution. Appointed by Lenin, Stalin became the commissariat for nationality affairs. This brought him to the same level of power as Trotsky. In April, Stalin was elected, alongside Yakov Sverdlov, Trotsky and Lenin, to the Central Committee of the Party where he helped Lenin decide all emergency issues in the first period of the civil war. Stalin was then at the exact same level as Trotsky, all that he had to do now was to become greater than Trotsky. Stalin's popularity started to increase because of his devotion to administrative tasks. In 1922 he reached his crucial stage in his fight against Trotsky - he became the secretary-general of the Party. Stalin quickly converted his position into a source of power, which no one had thought of previously, and so fulfilled his goal to become greater than Trotsky. Before his death Lenin realised, all to late, that Stalin did not know how to use his great power to sufficient caution and he wrote this in his "Testament". He wanted the removal of Stalin from his present position. ...read more.

Trotsky had important government posts but he did not have a power base because he was too complacent. Lenin was the one who helped him and made sure that he was not attacked. People mistrusted Trotsky because they thought that he went where the power was and so they could not count on him in hard times. He readily alienated people, which others didn't want and he was still regarded by many as an outsider. Trotsky made many mistakes throughout his career and Stalin benefited from these. He did not turn up at Lenin's funeral because he had a mystery illness. And for the same reason he could not attend important meetings held by Lenin. This meant that Stalin could say, and said that Trotsky did not care about Lenin and this made Trotsky loose his main support. This left Trotsky completely vulnerable. When Lenin was ill Trotsky, for an unknown reason, did not want to make the main speech in Lenin's place and so Stalin took this opportunity. Stalin could therefor say what he wanted and control the congress. People feared that Trotsky, with his leadership of the Red Army might take of the country and lead a military dictatorship. Stalin had a stronger position in the Party for all of these reasons and finally it brought him out on top of Trotsky. ...read more.