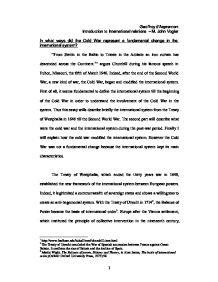 In what ways did the Cold War represent a fundamental change in the international system?

The Second World War was going to modify this order. The end of the Second World War implied new changes in the international system. Europe lost its predominant position and led the both new powers, namely the United States and Soviet Union which defeated Germany and Japan, to control the system. However, the relationship between the two states degenerated rapidly into a conflict, the Cold War. According to Watson, "The Cold War was a global but restrained struggle, marked on both side by defensive strategy and by competition for the allegiance or sympathy of people all over the world11". Each party possessed its own sphere of dominance (who were first settled at Tehran, Yalta and Potsdam conferences) and Europe became divided among the both superpowers. They were sometimes accused of imperialism12. The struggle was also ideological, Communism against liberal-democracy. Moreover, Alliances such as NATO13 (and the Warsaw Pact) were created to protect members of each sphere of dominance from the other side. The new international system became bipolar. At the same time, the post-war period was marked by others events which influenced the international system. First of all, the United Nations were created in 1945 by the victors on the ashes of the Leagues of Nations. The aims of this new organisation were nearly the same than its predecessor but the functioning was different. Indeed it was ruled by the Security Council where sit the permanent members (the Victors of the war: the United States, Soviet Union, the United Kingdom, France and China) ...read more.

However, the international system kept its main traits that it has acquired since the treaty of Westphalia. During the cold war, the sovereign state remained (and remains still today) the core of the international system. The Balance of Power, which characterized the relations since Treaty of Utrecht, was also present. The anti-hegemonial issued from Vienna settlement remains at once between the two superpowers but also inside a same side against the superpower. Gaullist France developed his own nuclear b**b and took out NATO18. Finally, the role of the United Nations during the Cold War was as well as inefficient to prevent war than the Leagues of Nations and the Third-World, as well as small powers or neutral powers before the Second World War, can nearly say nothing. The Cold War, despite of its bipolar character which is an important modification, did not change fundamentally the international system. After the Collapse of the Soviet Union and thus the "victory" of the United States, the Bipolarism was replaced by the American Domination and the United Nations has obtained a better role. Nevertheless, the international system stays anarchic and the state remains at the core. There is not yet a world government but only some general rules, such as the United Nations' charter, and beginning of regional entities, such as the European Union. Actually the end of the cold war represented a more fundamental change of the international system than the cold war itself. ...read more.