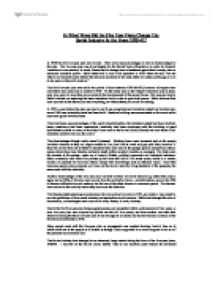 In What Ways Did the Five Year Plans Change The Soviet Industry In the Years 1928-41?

In What Ways Did the Five Year Plans Change The Soviet Industry In the Years 1928-41? In 1928 the first five-year plan was formed. There were many advantages as well as disadvantages to the plan. The five year plan was to set targets for the Soviet Union (Russia) as in order for Russia's 'socialism in one country' to work, Russia had to change from a backward agricultural country into an advanced industrial power. Stalin stated this in one of his speeches in 1931 where he said: "we are fifty to one hundred years behind the advance countries to the west, either we make up this gap in five to ten years or they will crush us." The first five-year plan was set for the period of time between 1928 to1933, however all targets were met within four years and so ended in 1932. ...read more.

The disadvantages though really weren't pleasant. Working hours were increased and so the people lost their freedom as they no longer worked to live, but lived to work and got paid little, however if they did not do their job to Stalin's standards they were sent to the gulags (prison camps/slave labour camps where they were literally worked to death within usually 6 months on average). The Zeks were the inmates at the gulags, made up of mainly Kulaks, political opponents and industrial saboteurs. Stalin eventually sent round his private police force the N.K.V.I to arrest quota, which is a certain number of peasants for his slave labour camps who built things such as Belomor canal. Also little consumer goods were produced, as it was not the aim to raise the living standards of the peasants, the same went with the electricity. ...read more.

in 1941. Many people went with the five-year plan as propaganda was created showing Lenin's face on it, which cried out to the people as it looked as though Lenin supported it or would support it and so all the peasants would follow suit. The Soviet industry had changed to an extremely large extent during the time of the five-year plans, 1928-41. I say this as the Soviet Union started 'fifty to one hundred years behind the advanced countries to the west,' which were Germany, France, the U.K and the U.S.A, and far surpassed them all except for the U.S.A. The Soviet Union was also able to move their industries beyond the mountains in order to protect them, which helped lead in the defeat of Germany's attack in 1941. Also great achievements were made for example electricity was created and the heavy machinery being quadrupled, also the fact that the first five-year plan was completed within the four years. ...read more.