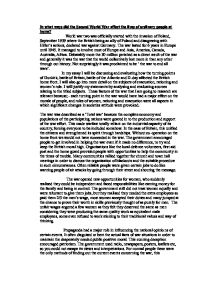 In what ways did the Second World War affect the lives of ordinary people at home?

In what ways did the Second World War affect the lives of ordinary people at home? World war two was officially started with the invasion of Poland, September 1939 where the British being an ally of Poland and disagreeing with Hitler's actions, declared war against Germany. The war lasted for 6 years in Europe until 1945. It managed to involve most of Europe and Asia, America, Canada, Australia, Africa. Debatably more the 30 million perished as a direct result of the war and generally it was the war that the world collectively lost more in than any other through out history. Not surprisingly it was proclaimed to be ' the war to end all wars'. In my essay I will be discussing and evaluating how the turning points of Dunkirk, battle of Britain, battle of the Atlantic and D-day affected the British home front. I will also go into more detail on the subjects of evacuation, rationing and women's role. I will justify my statements by analysing and evaluating sources relating to the titled subjects. These factors of the war that I am going to research are relevant because; - each turning point in the war would have had a major effect on the morale of people, and roles of women, rationing and evacuation were all aspects in which significant changes in societies attitude were provoked. The war was described as a 'Total war' because the complete economy and populations of the participating nations were geared in to the production and support of the war effort. This made warfare totally reliant on the industrial capacity of its country, forcing everyone to be included somehow. In the case of Britain, this unified the citizens and strengthened its spirit through hardships. Without co-operation on the home front we would not have succeeded in the war. The government encouraged people to get involved in helping the war even if it made no difference, to try and keep the British moral high. ...read more.

But considering the sheer amount of people involved the process run smoothly in the government's perspective and many evacuations worked with out a hitch. The government had also set up first aid stations showing they were obviously attempting to cope with all the inevitable problems that would arise. Many very poor children would arrive at reception areas with various health conditions such as scabies, lice and due to cold weather and lack of adequate clothing cold burns often formed. The clinics provided basic care before they were sent to hosts. On their identity cards they has health related information and often the kids that appeared unhealthy would be unfairly treated and hosts would be less likely to want them. The government tried to persuade families to separate from their loved ones by using propaganda. The predictions of casualties e.g. 4,000,000 in London far surpassed the actual figures and were there fore grossly exaggerated. Britain had been expecting air attacks for many years as the hostilities and threats had been building for several years before the war. Leaflets and Posters were important techniques of spreading their message about the evil extent Hitler would undertake to achieve his aims. This, initially discouraging and potential fear mongering way, proved to be effective as people were more intensely willing to participate in order to save their people and foil Hitler's plans to destroy public morale. The fact they used propaganda so wide spread proves people obviously needed a lot of convincing and the dark nature of the propaganda ( as in source B7 ) suggests the government were desperate to make an impact in order to attain their goal of the complete evacuation of children from cities. Subsequently when dealing with three million people there were many cases of disaster where the propaganda had inflicted panic instead of the hoped controlled movement. Sir John Anderson who as organising evacuation did not help this emotional upheaval, as he had a cold and detached not understanding nature. ...read more.

If the government had not put so much innovative effort and thought into it's propaganda campaign the country certainly would have become fractioned and protestors would have disrupted the smooth running of industry etc. resulting in the country loosing the war. Rationing there was a success, although many people went hungry particularly in the winter, no one starved. Conclusion The war obviously affected the lives of people at home dramatically and with out the general unified spirit maintained by peoples gut determination to prevent German invasion, Britain would certainly have lost the war. At many points of the war for instance Dunkirk, if the British people had not pulled together to help their comrades Hitler would have gained the upper hand. In all aspects of the war on the home front, from rationing to women's recruitment the government used very influential propaganda to persuade people of its crucial role in winning the war, often exaggerating facts for the greater good of supporting public morale. Most people wanted to prove how resilient and stubborn the British people could be in the face of danger and with motivational speeches from people like Churchill they believed they had a divine duty to stamp out the evil tyranny of n**i Germany. The war was a time of great change in the attitudes towards women and people became more accepting of each other's differences. Often children had to grow up quickly as they were given more responsibilities. Families were often separated due to bombing and evacuation and people had to deal with the grief of relations dying in battle and the visions of horror they experiences in the cities during raids. The end of the second world war marked a time of jubilation and national pride, people became very patriotic and also valued the democracy they lived in. The war also causes many minorities to be more open about their feelings of inferiority and the unjustness of prejudice, making them more demanding of change in times of peace as well. ...read more.