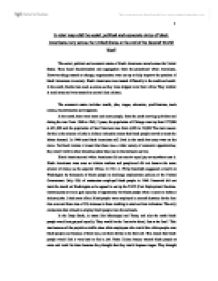 In what ways did the social, political and economic status of black Americans vary across the United States at the end of the Second World War?

In what ways did the social, political and economic status of black Americans vary across the United States at the end of the Second World War? The social, political and economic status of black Americans varied across the United States. They faced discrimination and segregation from the prejudiced white Americans. However things started to change; organisations were set up to help improve the position of black Americans in society. Black Americans were treated differently in the north and south. In the south, blacks were used as slaves as they were shipped over from Africa. They worked in rural areas and were treated as second class citizens. The economic status includes wealth, jobs, wages, education, qualifications, trade unions, discrimination and migration. In the north, there were more and more people, from the south moving up before and during the war. From 1940 to 1945, 5 years, the population of Chicago went up from 277,000 to 491,000 and the population of San Francisco rose from 4,800 to 32,000. The main reason for this is the creation of jobs in defence industries meant that black people moved to meet the labour demand. In 1940 most black Americans still lived in the south but many were on the move. For black women it meant that there was a wider variety of economic opportunities; they could work in other industries rather than just in the domestic service. ...read more.

Black people were allowed to vote. However, in practice, life was very different. There was limited mixing of races. Blacks and whites were not living happily next door to one another or attending the same equal schools because the different races would congregate in different areas. For example, the black district in New York was Harlem. This was repeated in many other cities also. Housing conditions for the black people was very poor. Black areas were often seen as ghettos; this meant that many failed to break out of the cycle of poverty. This is when poverty has affected the same family and many generations for years. Poor education (because black schools had poor facilities compared to white schools) led to low paid jobs or unemployment which meant living in run down areas of town which meant that their children would have to go to a poor school and so the cycle would start again. To sum up, black African-Americans were subjected to discrimination that was 'de facto' (actual position in reality/informal discrimination) rather than 'de jure' (official position in law/formal discrimination). The result of all this was increased racial tension in the north, especially as black people were without much hope of regular employment because of the prejudice they faced, and they also lived at the poorest end of the community. ...read more.

He set up the Commission on Civil Rights in 1946. He said that the basic requirements of all American citizens were homes, jobs, education, and the right to vote. At this time none of these rights for black people were equal to that of white people. Truman outlined civil rights as a moral issue. Generally, black American citizens in the north had a higher status than black citizens in the south. They had more employment opportunities and were able to work in industries like steel and iron rather than just farming in the rural south. Black people in both the north and south were faced with discrimination however and were often the 'last to be hired, first to be fired'. Segregation was also an issue, mainly in the south. In the south blacks and whites could not share any facilities whereas in the north they could. In the south the separate facilities were not of equal standard and the white facilities were far superior to that of the black facilities. The status of black Americans was changing after 1945; white liberals were becoming more and more aware of the black people's difficulty. In conclusion, I think that northern black Americans received a far higher status that that of the black southerners, however both were treated badly. It was unfair and morally wrong but black people were gradually gaining the rights that they deserved so that they could be equal to white people. ?? ?? ?? ?? 1 ...read more.