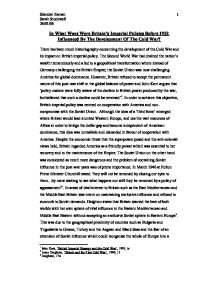 In What Ways Were Britain's Imperial Policies Before 1952 Influenced By The Development Of The Cold War?

In What Ways Were Britain's Imperial Policies Before 1952 Influenced By The Development Of The Cold War? There has been much historiography concerning the development of the Cold War and its impact on British imperial policy. The Second World War had drained the nation's wealth tremendously and a led to a geopolitical transformation where instead of Germany challenging the British Empire; the Soviet Union was now challenging America for global dominance. However, Britain refused to accept the permanent nature of this post-war shift in the global balance of power and John Kent argues that 'policy makers were fully aware of the decline in British power produced by the war, but believed that such a decline could be reversed'1. In order to achieve this objective, British imperial policy was centred on cooperation with America and non-compromise with the Soviet Union. Although the idea of a 'third force' emerged where Britain would lead a united Western Europe, and use the vast resources of Africa in order to bridge the dollar gap and become independent of American dominance, this idea was unrealistic and discarded in favour of cooperation with America. Despite the economic threat that the superpower posed and the anti-colonial views held, Britain regarded America as a friendly power which was essential to her recovery and to the maintenance of the Empire. The Soviet Union on the other hand was considered as much more dangerous and the problem of containing Soviet influence in the post-war years was of prime importance. In March 1946 at Fulton Prime Minister Churchill stated 'they will not be removed by closing our eyes to them...by mere waiting to see what happens nor will they be removed by a policy of appeasement2'. In areas of vital interest to Britain such as the East Mediterranean and the Middle East Britain was intent on maintaining exclusive influence and refused to succumb to Soviet demands. ...read more.

Although after the Moscow conference in 1944 Russia did put pressure on the Bulgarians to withdraw their forces there remained an uncertainty of Soviet intentions after the war. To combat this uncertainty in the Spring of 1945 the British removed the Plastiras government and installed a more conservative regime under Voulgaris. The British also refused to support American proposals for a tripartite economic mission to Greece, as they did not want any Soviet involvement in the country. Britain was able to acquire American support in the East Mediterranean through the Truman Doctrine in March 1947 which granted $400 million in military and economic aid to Turkey and Greece. This formed part of the American policy of containment where the Truman administration was prepared to send any money, equipment or military force to countries threatened by the communist government. Kent asserts that the underlying British imperial policy in the Cold War years was to defend her 'general global standing by a policy of no concessions to Russian wishes...and if necessary encourage American support for the defence of those interests where they were threatened by the Soviet Union'7. Regarding the organisation of the post-war world, one option available to Britain was a 'spheres of influence' deal where Russia effectively gained control of Eastern and Central Europe in return for not impinging on British or American interests in other areas of the world. Alternatively Britain would be granted a say in Eastern Europe in return for allowing Russia to play its full part in security arrangements in all parts of the world. Whilst neither option appealed to Bevin due to the potential danger, Prime Minster Attlee stressed the merits of an imperial retreat and held an internationalist position. Attlee believed that the advent of air power meant that neither the Mediterranean Sea routes nor the Middle East oilfields could be defended by mere physical presence any longer. ...read more.

As this could not be achieved through independence from the Americans and a Third Force, British imperial policy was instead shaped on an acceptance that it would have to be done through a continued Atlantic alliance and dependence on the United States. What can be said with certainty is that the Cold War helped maintain an imperial strategy that avoided acceptance of the permanent nature of the post-war shift in the global balance of power. The Second World War had resulted in a major dislocation of both Britain's economy, she was a declining power in 1945 and thus her ability to act independently on the post-war stage was closely tied to the ability to involve and control America. It was believed that cooperation rather than competition with America would enable economic recovery and the preservation of the Commonwealth and Empire. The overriding aim was the reestablishment of Britain as a world power equal to and independent of both the United States and the Soviet Union. In order to achieve this Britain's imperial policies were influenced with greater acceptance of a subordinate position in an American-dominated alliance. For example greater American authority and responsibility was granted in traditional British spheres of influence, for example in Greece, Turkey and Iran. Linked to the emphasis on an American alliance and the drive to sustain Britain's own world role was the need to avert the Soviet threat. Soviet encroachment on British interests would harm Britain's great power status and Bevin refused to make any concessions regarding vital interests in the East Mediterranean and Middle East, although recognition was given to Russian dominance in East Europe. Prime Minister Attlee had opposed the maintenance of commitments which exceeded Britain's manpower or financial resources and talked of the 'necessity of cutting our coat according to our cloth11'. Although this was done to an extent with greater American involvement and retreat from India and Palestine, the intention of the British Foreign Office throughout the Cold War period remained to hold on to her vital interests and strengthen rather than forfeit Britain's global standing. ...read more.