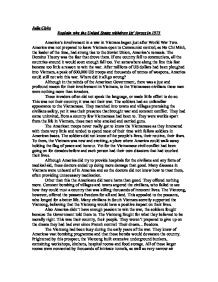 In why the United States withdrew its' forces in 1973

Julia Cloke Explain why the United States withdrew its' forces in 1973 America's involvement in a war in Vietnam began just after World War Two. America was not prepared to leave Vietnam open to Communist control, as Ho Chi Minh, the leader of the time, had strong ties to the Soviet Union, America's nemesis. The Domino Theory was the fear that drove them. If one country fell to communism, all the countries around it would soon enough fall too. Yet somewhere along the line this fear became too little a reason to win the war. After millions of US dollars had been ploughed into Vietnam, a peak of 600,000 US troops and thousands of tonnes of weapons, America could still not win this war. Where did it all go wrong? Although in the minds of the American Government, there was a just and profound reason for their involvement in Vietnam, to the Vietnamese civilians these men were nothing more than invaders. These invaders often did not speak the language, or made little effort to do so. This was not their country; it was not their war. The soldiers had an unfamiliar appearance to the Vietnamese. They marched into towns and villages promising the civilians safety, yet it was their presence that brought war and constant conflict. They had come uninvited, from a country few Vietnamese had been to. They were worlds apart from the life in Vietnam, these men who smoked and carried guns. The American troops never really got to know the Vietnamese as they interacted with them very little and tended to spend most of their time with fellow soldiers in American bases. The soldiers did not know of the people's lives, their routine, their fears. To them, the Vietnam was new and exciting, a place where America could walk away holding the flag of peace and honour. Yet for the Vietnamese civil conflict had been going on for decades before and each person had their own disasters that had touched their lives. ...read more.

The images they saw though were completely unexpected, as the brutal reality of war was slowly revealed. The public saw the harsh realities of dead Vietnamese civilians and the disastrous effects that the US bombing programme was causing. Whenever US troops stormed a village to hunt down the Vietcong, only a few paces behind them were the cameras, risking their lives to inform the American public. Innocent lives were daily affected, as broadcasters did not hold back on any details, even showing live deaths as US soldiers lined up Vietcong fighters and shot each one in the head with a single bullet. The American people were horrified. They had not known the full extent of war until they had seen these images. Images of dead civilians, burning villages and little success brought shame to the American public. They could not believe the appalling way US troops were treating fellow human beings and the inhuman ways of killing thousands. Of course, the people had heard about the new, advanced weaponry that America possessed and that they had started to use it in Vietnam. The one thing they did not know, however, was the sheer strength of these weapons and the true extent of their destruction. Agent Orange was a highly toxic defoliant that was sprayed using aeroplanes over the vast area of jungle in Vietnam. America did this in the hope that the Vietcong would run out of safe, jungle environment to take refuge in and would be easier to hunt down in the open air. What the people weren't prepared for was the effects of toxins on the land. It decreased the yield of crops, making many of them too rotten to eat. Those that were edible were highly contaminated with toxins, which quickly found their way into the bloodstream. As the level of toxins rose inside the civilians it caused adverse effects such as abnormal childbirth. ...read more.

It may have been 4 years of talks and promises, but Nixon had finally succeeded and given the people what they wanted. Although during the aftermath of Vietnam it had looked like America had pulled out because they were loosing and felt they could not win, recent historians have analysed new sources and are reaching new conclusions. Before it was thought that the Tet Offensive was a major loss for America, but today we now know that the North thought themselves it was a failure. They lost many of their key fighters during the campaign and had far superior losses than America. Some historians also doubt whether public opinion really had an influence on America's withdrawal. It is now thought that it was in fact the sheer cost of the war that forced America to reconsider and that most of the US public was actually pro the war, despite what old polls may suggest. We may never know the truth, but it has emerged that everything is not as clear-cut as it may have first seemed. In conclusion I believe the American public did most likely have an effect of the decisions made by the Government, as it was such a power force that it must have had some influence. I do think, however, that it was not all bad for America. They did not loose the Tet Offensive, but neither did they win it. This lack of obvious progress was the key feature in the decisions of the Government, as I feel that no-one would want to fight a war they were getting nowhere in. I do agree, it must have cost them a great deal to get nowhere in the war, but it cannot have been purely due to monetary costs as America still supplied the south with weapons that must have cost vast quantities. We will never know, but what we do know is that it definitely made American history. Being the only war America has ever lost, it leaves a bitter taste in the mouths of those who fought. ...read more.