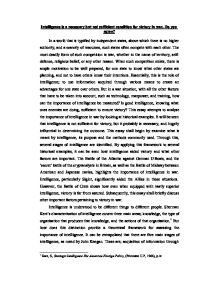 Intelligence is a necessary but not sufficient condition for victoryin war. Do you agree?

Intelligence is a necessary but not sufficient condition for victory in war. Do you agree? In a world that is typified by independent states, above which there is no higher authority, and a scarcity of resources, such states often compete with each other. The most deadly form of such competition is war, whether in the name of territory, self-defence, religious belief, or any other reason. When such competition exists, there is ample motivation to be well prepared, for one state to know what other states are planning, and not to have others know their intentions. Essentially, this is the role of intelligence; to use information acquired through various means to create an advantages for one state over others. But in a war situation, with all the other factors that have to be taken into account, such as technology, manpower, and training, how can the importance of intelligence be measured? Is good intelligence, knowing what ones enemies are doing, sufficient to ensure victory? This essay attempts to analyse the importance of intelligence in war by looking at historical examples. It will be seen that intelligence is not sufficient for victory, but it probably is necessary, and hugely influential in determining the outcome. ...read more.

However, through the use Sigint by the British and Americans, the effects of the German patrols were limited. Made famous in many novels and films,7 the role of the British cryptanalysts was crucial to Britain's ability to remain resilient to German forces. Through a combination of 'listening stations' based throughout the UK, German transmissions between U-Boats and headquarters were acquired. However, these messages were encrypted by an Enigma machine,8 the most advanced encryption method ever devised. The interpretation element of intelligence was carried out by teams of cryptanalysts, linguists, and mathematicians at Bletcley Park in Britain. Often slow, laborious work, the Enigma code was eventually broken, and thus the British and Americans could read German communications. The resulting intelligence, known as Ultra, allowed American convoys to avoid U-Boat patrols, and ensure the supply of resources continued. The importance of this intelligence operation is immense. F.H. Hinsley went as far as to argue that it shortened the length of the war by three or four years.9 Sigint can thus be described as crucial in ensuring victory in this chapter of World War Two. Another example demonstrating the importance of intelligence is found in the Battle of Midway, in World War Two, which involved conflict between the Japanese and American Navies. ...read more.

This essay has asserted that intelligence, though an important and increasingly necessary condition for victory in war, is not sufficient in itself. It was seen that intelligence encompasses many distinct aspects, from acquisition to implementation, and to effectively influence the outcome of war on a large scale, all are necessary. In the Battle of the Atlantic, it was seen how Sigint made a huge contribution to the resilience of Britain while under threat of invasion. By allowing for American assistance, the breaking of Enigma and the defeat of the U-Boats, made a significant contribution to winning the war. However, without the technology of interception, the personnel of the navy and the perseverance of the British, all the intelligence in the world may not have helped. The same picture emerges from the Battle of Midway. Excellent intelligence allowed for a successful defence of the islands, but it was the knowledge of the fleet commanders, lack of it in their Japanese counterparts, and a bit of luck, that ensured victory. In the Battle of Crete, the limitations of intelligence were highlighted. Even when coupled with excellent foreknowledge, a lack of command ability, internal communications, and a more dedicated enemy, means victory would be unlikely. Other factors have been highlighted and though its importance should rarely be underestimated, "intelligence can only work through strength. ...read more.