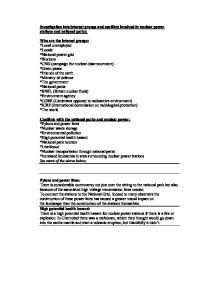 Investigation into interest groups and conflicts involved in nuclear power stations and national parks: Who are the interest groups: *Local unemployed *Locals *National power grid *Workers *CND (campaign for nuclear disarmourment) *Green peace *Friends of the earth *Ministry of defence *The government *National parks *BNFL (British nuclear fuels) *Environment agency *CORE (Cambrians opposed to radioactive environment) *ICRP (international commission on radiological protection) *The world Conflicts with the national parks and nuclear power: *Pylons and power lines *Nuclear waste storage *Environmental pollution *High potential health hazard *National park tourism *Livelihood *Nuclear transportation through national parks *Increased leukaemia in area surrounding nuclear power stations See more of the above below; Pylons and power lines: There is considerable controversy not just over the sitting to the national park but also because of the associated high voltage transmission lines needed To connect the stations to the National Grid. Indeed to many observers the construction of these power lines has caused a greater visual impact on the landscape than the construction of the stations themselves. High potential health hazard: There is a high potential health hazard for nuclear power stations if there is a fire or explosion. In Chernobyl there was a meltdown, which they thought would go down into the earths mantle and start a volcanic eruption, but thankfully it didn't. ...read more.

A private blood test confirmed chromosome defects due to radiation exposure. Neither his high body count, dismissed by BNFL as being due to a faulty machine, nor his chromosome damage were ever explained by the company. The couple have been trying to get to the truth for 10 years and will continue to do so. They are sure there are other families worldwide, either employed by or living around nuclear installations who are trying to get justice and they wish them luck. They believe the industry is one big cover-up and condemn the cavalier attitude of the 50's and 60's when employees, who were initially selected for being 100% fit, were deliberately exposed to unknown, but now considered unacceptable, risks to their health. They are appalled by the industry's denials over Joe's and their children's health problems. He was never offered compensation for his accident much less any sympathy. "Never in our wildest dreams did we consider the far reaching consequences and the terrible tragedies. You don't expect to outlive even one of your children, much less three. If BNFL had to sit at a bedsite and watch each child die, they might be a bit more compassionate" said Stella, "BNFL just do not want to know - they just brush it all under the carpet and hope we will give up our campaign for truth and justice, but we are sorry to disappoint them." ...read more.

This is accomplished by reducing the height of the reactor buildings from 55 meter to 32 meters. That requires lowering the height of the tall structures inside the buildings, such as parts of the boilers and the refuelling machines. Safe-store structures of reduced height can then be constructed. 1993- 2004 Trawsfynydd Power Station lies within the boundaries of a National Park of considerable beauty and is located on the northern bank of Llyn Trawsfynydd. Following the decommissioning of the plant, the existing building structure is to be reduced in height and encased in a new 'Safestore' envelope. The objective is to reduce and in some cases eliminate the buildings impact within the National Park. The Safestore structure is to provide an aesthetically acceptable, cost effective means of long term, secure storage for specific radioactive materials and structures. As well as minimising the visual impact of the site the structure is based on the following criteria: The design life shall be 135 years. During the majority of this period it is proposed that the site will be unmanned. The structures shall be intruder resistant with a 9m wall also gives an improved visual balance between the lower and upper levels of the external elevations. The landscape within the site boundary will reflect the character of the natural surrounding landscape so the there are no visible boundaries and the landscape flows naturally through the site. ...read more.