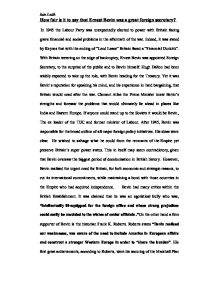 Is it fair to describe Bevin as a great foreign secretary?

How fair is it to say that Ernest Bevin was a great foreign secretary? In 1945 the Labour Party was unexpectedly elected to power with Britain facing grave financial and social problems in the aftermath of the war. Indeed, it was stated by Keynes that with the ending of "Lend Lease" Britain faced a "Financial Dunkirk". With Britain teetering on the edge of bankruptcy, Ernest Bevin was appointed Foreign Secretary, to the surprise of the public and to Bevin himself. Hugh Dalton had been widely expected to take up the role, with Bevin heading for the Treasury. Yet it was Bevin's reputation for speaking his mind, and his experience in hard bargaining, that Britain would need after the war. Clement Atlee the Prime Minister knew Bevin's strengths and foresaw the problems that would ultimately lie ahead in places like India and Eastern Europe. If anyone could stand up to the Soviets it would be Bevin, The ex leader of the TUC and former minister of Labour. After 1945, Bevin was responsible for the broad outline of all major foreign policy initiatives. His ideas were clear. He wished to salvage what he could from the remnants of the Empire yet preserve Britain's super power status. This in itself may seem contradictory, given that Bevin oversaw the biggest period of decolonisation in British history. However, Bevin realised the urgent need for Britain, for both economic and strategic reasons, to cut its international commitments, while maintaining a bond with those countries in the Empire who had acquired independence. Bevin had many critics within the British Establishment. It was claimed that he was an egotistical bully who was, "intellectually ill-equipped for the foreign office and whose strong prejudices could easily be moulded to the wishes of senior officials ."On the other hand a firm supporter of Bevin is the historian Frank K. Roberts. Roberts states "Bevin realised our weaknesses, was aware of the need to include America in European affairs and construct a stronger Western Europe in order to "share the burden". ...read more.

Perhaps the Act was intended to keep the countries from calling for independence or, more cynically, to create the impression that Britain remained a great power. When Bevin was appointed Foreign Secretary his clear aim was to retain as much of the Empire as possible, as any other policy in his view would have made Britain look weak to a degree that it plainly could not afford. However with debts of nearly �4billion (the equivalent in today's money would be some �105 billion) Corelli Barnett argues, "It was a waste of money! It constituted a wide open mouth into which the Labour Government chose to stuff annually �20 million of capitol investment, so urgently needed to modernise Britain." Barnett's argument is simple. If Britain had not continued to chase its great power status but had focused on improving the country's economy, Britain would have fared far better economically and would not have unnecessary foreign burdens which the country could not afford to defend. Sir Henry Tizzard's view matched that of Barnett when he argued, "We are not a great power and never will be again. We are a great nation but if we continue to behave like a great power we will also soon cease to be a great a nation." Chasing great power status was arguably one of Bevin's greatest mistakes which attracted significant criticism. On the other hand, it can be argued that Britain had to stand firm and continue to project an image of a super power to reduce the threat of aggression from the Soviet Union in Western Europe. Bevin had strong anti-communist beliefs coupled with a distrust of Russia and was determined not to allow the Soviets further than Berlin. Bevin also realised it was essential to keep the USA involved in European affairs. Kevin Jeffrey's backs Bevin by stating in his book, "The Atlee Governments," "There was a growing conviction that Britain's post war security and economic recovery depended upon Washington." ...read more.

The continued establishment of Britain's place in "the Big Three" of world powers was achieved through "Decolonisation without trauma" as Morgan stated. Bevin was equally successful in drawing America into Europe and the Mediterranean, thus ensuring that America filled the vacuum left by Britain. Overall Bevin cleverly manipulated American power to secure British interests. Marshal Aid, Truman Doctrine and consequently the halt of further Soviet expansion can all be attributed in part to Bevin's leadership and capacity to negotiate with leaders such as Molotov. Bevin's reluctance to appreciate the potential of the European ideal, in that he maintained an isolationist stance on behalf of Britain, was perhaps his "greatest mistake". As Acheson stated, "He felt that Britain was too superior to join the ECSC". Nevertheless, he did begin the process of European unity by organising Marshal Aid and setting up the OEEC. The second most telling criticism levelled against Bevin was his reluctance to grasp that Britain was no longer the power that she once was. Barnett argues that we committed massive amounts of our economies resources in the pursuit of "our dreams and illusions of world power status." Such a policy was ultimately harmful for Britain's long term economic survival in positioning the country to address the growing economic threat that one day would come from of the re-emergent Germany and Japan. It hindered Britain's economic growth and arguably sacrificed the long term future of Britain as a great economic power. Future generations would perhaps pay the price for Britain's illusions in the form of lower economic growth, more limited prospects and a lower standard of living than European counterparts. Bevin clearly realised the threat posed by the USSR, and was right to form the Brussels Pact, blocking German rearmament and the NATO alliance which has had unrivalled success. Bevin lived up to his reputation and did not back down from the Soviet threat. Allied with his relative success in managing the difficult process of de-colonisation in very difficult circumstances, the legacy of Bevin as a great Foreign Secretary is undeniable. ?? ?? ?? ?? Iain Leith ...read more.