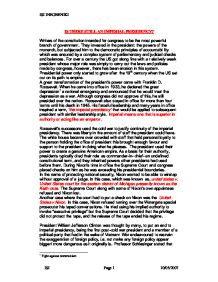 Is There Still an Imperial Presidency?

IS THERE STILL AN IMPERIAL PRESIDENCY? Writers of the constitution intended for congress to be the most powerful branch of government. They invested in the president: the powers of the monarch, but subjected him to the democratic principles of accountability which was ensured by a complex system of parliamentary and judicial checks and balances. For over a century the US got along fine with a relatively weak president whose major role was simply to carry out the laws and policies made by congress, however, there has been erosion in this system. Presidential power only started to grow after the 19th century when the US set out on its path to empire. A great transformation of the president's power came with Franklin D. Roosevelt. When he came into office in 1933, he declared the great depression1 a national emergency and announced that he would treat the depression as a war. Although congress did not approve of this, he still presided over the nation. Roosevelt also stayed in office for more than four terms until his death in 1945. His forceful leadership and many years in office inspired a term, 'the imperial presidency' that would be applied to subsequent president with similar leadership style. Imperial means one that is superior in authority or acting like an emperor. ...read more.

Terrorism is a crime against humanity and as such should be treated as a criminal offence and should be dealt with by the police. President W. Bush declaring war on terrorism without the approval of congress is unconstitutional and it is an abuse of power. The war in my opinion was infused with the spirit of seeking unilateral American dominance. President Bush's policies on foreign affairs are examples of his arrogance of power; telling President Yasser Arafat to step down or telling the Palestinians they cannot vote for Arafat, the war on terrorism, the invasion on Iraq and deposing Iraq's Saddam Hussein are unconstitutional because congress did not approve of it. It is unprecedented in the history of any democratic nation, thus taking it back to the colonial era. And by these actions, he is acting as an imperial president. There have, of course, been occasions when a sitting President has assumed war making powers with little regard for the views of Congress or the general public. US forces were already involved in Vietnam when Lyndon Johnson engineered the Gulf of Tonkin Resolution of 1964, and George Bush Senior agreed in a two-day Senate debate on US intervention in the Persian Gulf, but George W. Bush has surpassed his predecessors in the assumption of imperial powers--most obviously, perhaps, in his tendency to conflate America's war against terrorism with his own existential destiny. ...read more.

The issue of imperial presidency is some worth similar to George Orwell's famous book; "the animal farm" where there was a search and desperate need for a perfect leader who is unbiased and would follow the lay-down rules of the founding fathers. But each time they get deceived into voting in the wrong person no leader can ever be perfect and when put in such great place of power seize to make best use if not exceed the boundaries of the power. This is why Congress has to place a check and balance on presidency, the leniency of congress is becoming a course for concern. When congress gave Lyndon B. Johnson a free hand to do whatever he believed was necessary in Southeast Asia, the result was the deadly Vietnam War that ripped America apart. Now congress is being extra indulgent with the bush administration. The people should show their resentment to the imperial presidency. Also election should be done justly so that the fluke that put Bush into administration doesn't occur again. If congress and the judiciary can put a proper check like that of Nixon's or Ronald Reagan's regime, congress would acquire its rightful position in the balance of power and the democratic nation which the founding fathers intended for would be derived. 1 Fight against communism 2 About 2,400 detainees being held by US military troops ?? ?? ?? ?? ISI INEGBENIKI ISI Page 1 10/05/2007 ...read more.