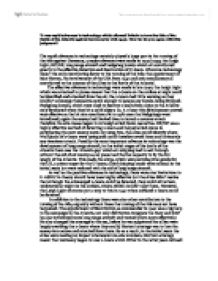 'It was rapid advances in technology which allowed Britain to turn the tide of the Battle of the Atlantic against Germany by mid-1943'. How far do you agree with this judgment?

'It was rapid advances in technology which allowed Britain to turn the tide of the Battle of the Atlantic against Germany by mid-1943'. How far do you agree with this judgment? The rapid advances in technology certainly played a large part in the turning of the tide against Germany, 4 major advances were made in 1942/1943; the Leigh Light, HF/DF, long range aircraft and hedgehog bombs which all contributed greatly to the effective detection and destruction of U-boats. Of course technology wasn't the only contributing factor to the turning of the tide; the appointment of Max Horton, the involvement of the USA from 1941 and axis complacency all contributed to the success of the allies in the Battle of the Atlantic. The effective advances in technology were made in late 1942; the Leigh Light which was attached to planes meant that the u-boats on the surface at night could be identified and attacked from the air; the u-boats had little warning so they couldn't submerge themselves quick enough to escape any bombs being dropped. ...read more.

As well as the positive advances in technology, there were also limitations to it. ASDIC in theory should have been highly effective but the allies didn't realize that although the submerged u-boats could be detected, they could still attack, undetected at night on the surface, where ASDIC couldn't spot them. However, the Leigh Light of course put a stop to this in 1942 when surfaced u-boats could be detected. In addition to the technology there were also other contributors to the turning of the tide, arguably without these the turning of the tide may not have happened. The appointment of Max Horton as commander in 1942 was a big help to the campaign in the Atlantic, not only did Horton integrate the Navy and RAF he also introduced more long range aircraft and trained pilots more effectively. He also changed the strategy in the sea, before he was appointed the allies were largely avoiding the u-boats where they could; Horton's strategy was to lure the enemy into action and attacked from there. ...read more.

The USA's involvement in the war from 1941 also helped in the Atlantic, they were an economic superpower, capable of producing large numbers of liberty ships in a few days; over 2000 were built in 1945 alone. These liberty ships also aided the convoys of merchant ships which made Germany's objective of stopping all supply to Britain increasingly difficult to complete. Although there are many other contributing factors to the turning of the tide in the Atlantic, it is clear that new technology was the most effective. Without the technology, allied losses would still have been high from night attacks; Horton's strategy would have been futile against such offensives. The new weapons brought a refreshing change to the allied attacks which the enemy wasn't expecting and could do nothing about. The complacency of the axis may have gone undiscovered if HF/DF hadn't been invented as the allies would have probably taken longer to identify the repetitive formation of the u-boats. Without technology, the other contributing factors wouldn't have been as effective, therefore making it a vital catalyst in the turning of the tide against Germany. ...read more.