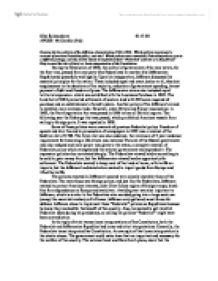 Olha Kolesnykova 10-17-08 APUSH- Mr.Gamble (3rd) Examine the key policies of the Jefferson administration (1801-1809). Which policies represented a reversal of previous Federalist policy, and why? Which policies were essentially Federalist policies, just in a different package, and why did he choose to implement these "Federalist" policies as a Republican? Keep in mind the idea of strict vs. loose interpretation of the Constitution. During the Revolution of 1800, the control of government of the new nation, for the first time, passed from one party (the Federalists) to another (the Jeffersonian Republicans) peacefully and legally. Upon his inauguration, Jefferson discussed his essential principles for the nation. ...read more.

Some of these policies were reversals of previous Federalist policy. Freedom of speech and later the end to prosecution of newspapers in 1802 was a reversal of the Sedition Act of 1798. The Alien Act was also undercut- the minimum of 5 year residence requirement for becoming a US citizen was restored. The size of the federal government was also reduced and more power was given to the states, a complete reversal of Federalist policy which strengthened the national government and expanded it. The expansion policies also contrasted sharply. The Federalists viewed land as something to be sold to gain money from, but the Jeffersonian viewed land as opportunity for settlement. ...read more.