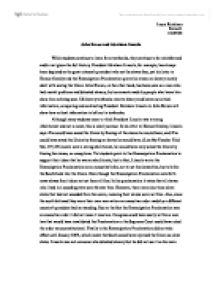 John Brown and Abraham Lincoln While students continue to learn from textbooks, they continue to be misinformed and/or not given the full history. President Abraham Lincoln, for example, has always been depicted as the great sixteenth president who set the slaves free, yet his letter to Horace Greeley and the Emancipation Proclamation prove his views on slavery mostly dealt with saving the Union. John Brown, on the other hand, has been seen as a man who had mental problems and detested slavery, but comments made by people who knew him show him as being sane. US history textbooks rewrite history and leave out critical information; comparing and contrasting President Abraham Lincoln to John Brown will show how critical information is left out in textbooks. Although many students seem to think President Lincoln was a strong Abolitionist and not a r****t, this is clearly untrue. ...read more.

Also, since the south believed they were their own new nation an executive order made by a different country's president had no standing. Due to the fact the Emancipation Proclamation was an executive order it did not mean it was law. Congress could have easily written a new law that would have invalidated the Proclamation or the Supreme Court could have ruled the order as unconstitutional. Finally in the Emancipation Proclamation did not take effect until January 1863, which meant the South could have rejoined the Union as slave states. Lincoln was not someone who detested slavery but he did not see it as his main concern, the biggest issue was bringing the Union back together, so he used slavery as a bribery tactic to meet his goal. John Brown, unlike Lincoln, protested and fought solely for the demolition of slavery. ...read more.

However, there are many sources to approve this well-known lie. Virginia Governor Wise interviewed Brown and said he had "quick and clear perception", " rational premises and consecutive reasoning", "compose and self -possession." (Lies My Teacher Told Me 167) John Brown was not a man that belonged in a mental ward. Brown was also not a man lacking morals; George Tempelton Strong wrote that he was a "conservative Christian." Textbooks have failed to mention any of the above. Abraham Lincoln and John Brown although both were portrayed as wanting to abolish slavery, Lincoln heroically, Brown in a tirade, textbooks lack the facts behind each of the goals the two men sought. Lincoln although concerned about slaver, focused mainly on bringing the Union back together. Brown fought passionately to abolish slavery by means of violence. Both these men play an important part in US history but will only be remembered truthfully if textbooks add in the real facts. Laura Koistinen Period 4 01/07/03 ...read more.