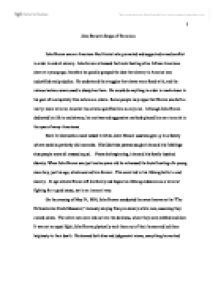 John Browns Reign of Terrorism John Brown was an American Abolitionist who promoted and supported armed conflict in order to end all slavery.

John Brown's Reign of Terrorism John Brown was an American Abolitionist who promoted and supported armed conflict in order to end all slavery. John brown witnessed the brutal beating of an African American slave at a young age; therefore he quickly grasped the idea that slavery in America was unjustified and prejudice. He understood the struggles that slaves were faced with, and the vicious tactics owners used to discipline them. He would do anything in order to reach closer to his goal of a completely free nation as a whole. Some people may argue that Brown was both a martyr and a terrorist, however his actions specified him as only one. Although John Brown dedicated his life to end slavery, his motives and aggressive methods placed him as a terrorist in the eyes of many Americans. Born in Connecticut and raised in Ohio, John Brown was brought up in a family where racial superiority did not exist. His Calvinist parents taught him and his 7 siblings that people were all created equal. ...read more.

Brown committed crimes against the innocent, characterizing him as a terrorist. (John Brown's Holy War) When Brown noticed slavery growing radically stronger in the late 1850's he felt he must take action. In 1859 John Brown led the raid on Harpers Ferry. This raid led to the national understanding on the issues of slavery, yet it also caused the death of many. Brown planned to attack the U.S Federal Arsenal at Harpers Ferry, Virginia. This was his failed attempt to begin an armed anti-slavery revolt by conquering the Arsenal. This attack led to death of ten of his men, including two of his sons and himself. When caught and tried in a court of law he was sentenced to death. The event that occurred on October 16 was unnecessary, he held hostages obtained guns, and a small army. John Brown approached the situation in all the wrong ways, and because of his absentmindedness, the lives of many including his own blood were lost. ...read more.

"I, John Brown, am now quite certain that the crimes of this guilty land will never be purged away but with Blood."(Brown). John Brown stated that he couldn't end the crimes committed by pro-slavery men without committing crimes of his own, proving he was a terrorist in his own mind-set. John Brown was hanged on December 2, 1859, the abolitionist John Brown was hung in Charlestown, Virginia for the crime of treason. John Brown was also accused of murdering five pro-slavery settlers.(The American Experience) John Brown showed specific traits which distinguished him as a tyrant. He endangered the lives of others on his journey to free slaves and committed crimes in order to abolish slavery. His dedication as a white abolitionist led to such events as The Pottawatomie Creek Massacre and The Raid on Harpers Ferry. The motives John Brown had in order to abolish slavery were aggressive and dangerous. . Brown did not allow anything to come between him and his goal, and this ultimately worked as a disadvantage. His stubborn ideas and cruel intentions categorized him as a historical terrorist, who deserved to die. ...read more.