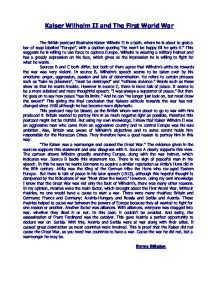 Kaiser Wilhelm II and The First World War The British postcard illustrates Kaiser Wilhelm II in a bath, where he is about to grab a bar of soap labelled "Europe", with a caption quoting "He won't be happy till he gets it." This suggests he is willing to use force to capture Europe. Wilhelm is wearing a military helmet and has a greedy expression on his face, which gives us the impression he is willing to fight for what he wants. Sources B and C both differ, but both of them agree that Wilhelm's attitude towards the war was very violent. In source B, Wilhelm's speech seems to be taken over by his emotions: anger, aggression, passion and lots of determination. ...read more.

Britain wanted to portray him in as much negative light as possible, therefore this postcard might not be truthful. But using my own knowledge, I know that Kaiser Wilhelm II was an aggressive man who came from an aggressive country and to control Europe was his sole ambition. Also, Britain was aware of Wilhelm's objectives and to some extent holds him responsible for the Moroccan Crises. They therefore have a good reason to portray him in this way. "The Kaiser was a warmonger and caused the Great War." The evidence given in the sources supports this statement and also disagrees with it. Source A clearly supports this view. ...read more.

There were many rivalries; Britain and Germany; France and Germany; Austria-Hungary and Russia and Serbia and Austria. These rivalries helped to cause war between the powers of Europe because they all wanted to fight for one reason or another. Another factor was alliances. With alliances, everyone was dragged into war, whether they liked it or not. In this case, it couldn't be avoided. And lastly, the assassination of Franz Ferdinand was the catalyst. This gave Austria a perfect opportunity to declare war on Serbia. With this, Austria and Serbia were at war along with their allies. It caused great destruction as most countries were involved. This is proof that the Kaiser did not cause the Great War, as you need two countries to have a war. Cause the war he did not, but a warmonger he may be. Emma Billsdon ...read more.