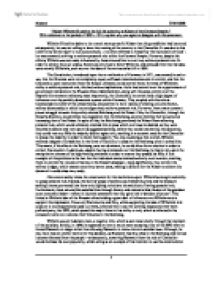 &quot;Kaiser Wilhelm II used to the full his authority as Kaiser of the German Empire.&quot; With reference to the period of 1890 - 1914, explain why you agree or disagree with this statement.

"Kaiser Wilhelm II used to the full his authority as Kaiser of the German Empire." With reference to the period of 1890 - 1914, explain why you agree or disagree with this statement. Wilhelm II had the desire to be a much more powerful Kaiser than his grandfather had been and subsequently, he was not willing to leave the running of the country to the Chancellor. It was due to this belief in his 'divine right' to rule autocratically - he often referred to himself as 'the instrument of God' - he was constantly striving to achieve personal rule within the German Empire. However, despite his efforts, Wilhelm was too easily influenced by those around him to ever truly achieve personal rule. In order to achieve his own wishes, Eulenburg only had to flatter Wilhelm, and persuade him that his ideas were actually Wilhelm's, such as over the issue of the anti-socialist bill in 1894. The Constitution, introduced upon the re-unification of Germany in 1871, was created in such a way that the 26 states were not completely equal, as Prussia remained somewhat in control, and that the Chancellor, upon instruction from the Kaiser, ultimately could control them. In terms of Wilhelm's ability to achieve personal rule, this had various implications. As he had control over the appointment of government ministers to the Prussian State Administration, along with the same control over the Imperial Government ministers, most importantly, the Chancellor, he certain held a high degree of influence over the partially democratic system within Germany. This, coupled with his role as Commander-in-Chief of the armed forces, allowed him to have visions of creating an authoritarian, military dictatorship in which he could genuinely achieve personal rule. However, there was a constant power struggle between the publicly elected Reichstag and the Kaiser. Only the Chancellor, through the Kaiser's direction, could initiate new legislation into the Reichstag, severely limiting their powers and increasing that of the Kaiser. ...read more.

The issue of protective tariffs caused many issues for Wilhelm. Initially, Bulow lowered the tariffs placed on goods from Italy, Austria-Hungry and Russia, in return for a favourable rate on German goods. This decision made Wilhelm more popular with the Centre Left within the Reichstag, enabling him to gain a higher chance of receiving support for his Bills. However, as a further display of his irresolute nature, he failed to successfully have the Subversion Bill passed, as the working classes rose alongside German's industrial growth. This suggests that it was partly due to the Kaiser's own inability to chose consistent allies within the Reichstag that left him struggling to gain the type of authoritarian rule he desired. Unsurprisingly, Wilhelm changed his approach to protective tariffs in 1902 when Bulow presented the Tariff Act to the Reichstag. Instead of lowering the tariffs, as Bulow wished this Act increased them, in order to act as protection for the Junkers. One could argue that this act enabled Wilhelm to gain a higher degree of personal rule as it resulted in the formation of a Centre Right coalition, whilst leaving the SPD excluded and annoyed. However, it failed to please the more extreme Junkers and the loss of support from the SPD made it harder for the Kaiser to pass his Bills later on, including the 1905 military budget. Consequently, the sheer fact that Bulow had to play games with the Reichstag in order to enable the Kaiser to enforce his authority shows that in reality, the Kaiser was far from having personal rule and was instead accountable to those whom he would have seen as beneath him. This sense of being subject to the wishes of the Reichstag can be seen through the consequences of the Daily Telegraph Affair, in 1908. This incident, in which Wilhelm isolated himself from the public after an he had an unmonitored interview with the British newspaper, and that of the previous year when it became well known that some of his closet friends and advisors had been involved in a h********l scandal, created a wedge between Bulow and Wilhelm. ...read more.

Consequently, there was a constant battle between the Kaiser and the Reichstag as the power balance fell strongly in the favour of the Reichstag. Financial problems, mainly due to the Kaiser's lack of direct control over taxation, occurred throughout this period, resulting in him having too little money to go ahead with his desired projects, such as gaining and running of Germany's unprofitable colonies. This in itself was a sign of his lack of personal rule but was further confirmed when Bulow was unable to solve the treasury's operating deficit due to the contrasting wishes of the various Reichstag parties, showing that the Kaiser was trapped in a battle to satisfy everyone else, rather than being able to simply satisfy himself through personal rule. Holwegg was able to delay the Reichstag elections for 2 years, freeing up funds to pay 90 million marks off the country's debt. Although this proved the Kaiser had some power granted by the constitution, in terms of raising more sustainable cash sources - such as through taxation - he was restricted by the Reichstag due to the limitations he had in relation to enforcing new legislation. Overall, throughout this twenty-four year period Wilhelm was engaged in a constant power struggle with the Reichstag. In relation to the statement, it is difficult to say that he used his full authority as those around him were constantly questioning this authority. Subsequently, there is strong evidence to suggest this statement is indeed incorrect - particularly, when one considers the frequent examples of the Reichstag's control over Wilhelm, such as that displayed after the Daily Telegraph Incident. However, there were also periods of triumph for Wilhelm, where, through a series of compromises and the skilful talents of his Chancellors, he managed to achieve his desires. Yet, by the sheer fact he needed to be so manipulative, proved he had failed to achieve personal rule and to thus use his full authority. ?? ?? ?? ?? History 11/07/2008 1 ...read more.