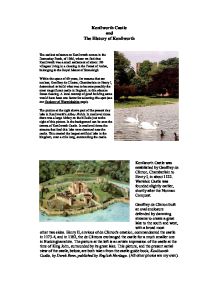 Kenilworth Castle and The History of Kenilworth.

Kenilworth Castle and The History of Kenilworth The earliest reference to Kenilworth occurs in the Domesday Book, of 1086, where we find that Kenilworth was a small settlement of about 100 villagers living in a clearing in the Forest of Arden, belonging to the Royal Manor of Stoneleigh. Within the space of 40 years, for reasons that are unclear, Geoffrey de Clinton, Chamberlain to Henry I, determined to build what was to become possibly the most magnificent castle in England, in this obscure forest clearing. A local outcrop of good building stone would have been one factor for selecting this spot (see our Geology of Warwickshire page). The picture at the right shows part of the present day lake in Kenilworth's Abbey Fields. ...read more.

Henry II, envious of de Clinton's creation, commandeered the castle in 1173-4, and in 1182, the de Clintons exchanged the castle for a much smaller one in Buckinghamshire. The picture at the left is an artists impression of the castle at the time of King John, surrounded by its great lake. This picture, and the present aerial view of the castle, below, are both taken from the castle guide book, Kenilworth Castle, by Derek Benn, published by English Heritage. (All other photos are my own). This is the Norman Keep. It is one of the oldest parts of Kenilworth Castle, and was designed to be an impregnable military fortress. ...read more.

This is the tall structure at the far right of the picture. The picture below right shows the remains of John of Gaunt's Great Hall. John of Gaunt was a son of Edward III. On Edward's death the crown passed to Richard II, who was only 12, and John of Gaunt was in practical terms king of England. John of Gaunt's eldest son, Henry Bolingbroke deposed Richard, and became Henry IV. Henry IV probably spent some of his childhood here. John of Gaunt's daughter, Joan, married Ralph Neville, and their son Richard was father of Richard Neville, Earl of Warwick, the Kingmaker. There is an amazing geneology of John Of Gaunt, listing his descendents through 21 generations to the present day, at John of Gaunt Genealogy [huge page]. You're possibly a descendent yourself. ...read more.