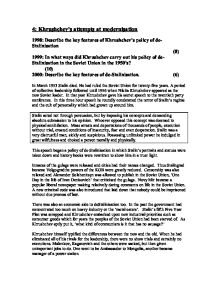 4: Khrushchev's attempts at modernisation 1998: Describe the key features of Khrushchev's policy of de-Stalinisation (8) 1999: In what ways did Khrushchev carry out his policy of de-Stalinisation in the Soviet Union in the 1950's? (10) 2000: Describe the key features of de-Stalinisation. (6) In March 1953 Stalin died. He had ruled the Soviet Union for twenty-five years. A period of collective leadership followed until 1956 when Nikita Khrushchev appeared as the new Soviet leader. In that year Khrushchev gave his secret speech to the twentieth party conference. In this three hour speech he roundly condemned the terror of Stalin's regime and the cult of personality which had grown up around him. Stalin acted not through persuasion, but by imposing his concepts and demanding absolute submission to his opinion. Whoever opposed this concept was doomed to physical annihilation. Mass arrests and deportations of thousands of people, execution without trial, created conditions of insecurity, fear and even desperation. Stalin was a very distrustful man, sickly and suspicious. Possessing unlimited power he indulged in great wilfulness and choked a person morally and physically. This speech began a policy of de-Stalinisation in which Stalin's portraits and statues were taken down and history books were rewritten to show him in a truer light. Inmates of the gulags were released and cities had their names changed. Thus Stalingrad became Volgogradthe powers of the KGB were greatly reduced. Censorship was also relaxed and Alexander Solzhenitsyn was allowed to publish in the Soviet Union, 'One Day in the life of Ivan Denisovich' that criticised the gulags. Novy Mir became a popular liberal newspaper making relatively daring comments on life in the Soviet Union. A new criminal code was also introduced that laid down that nobody could be imprisoned without due process of law. There was also an economic side to deStalinisation too. In the past the government had concentrated too much on heavy industry or the 'metal eaters'. ...read more.

and the first man in space in 1961 (Yuri Gagarin). But Khrushchev had certainly failed to solve the Soviet Union's shortage of grain and having to import American grain in 1963 and 1964 was a terrible admission of defeat. His attempts to improve industrial productivity also failed to come even close to outstripping the west, while many hard-line communists resented his criticisms of Stalin and blamed his leniency for provoking the Hungarian Uprising in 1956. They also criticised him for 'backing down' to Kennedy in the 1962 Cuban Missile Crisis. Thus in October 1964 he was called back from holiday to be told that the central committee had sacked him. Pravda soon after commented on his rule, 'harebrained scheming, hasty conclusions, rash decisions based on wishful thinking, boasting and empty words . . . All these are defects alien to the party'. 1964 - 1985: The old guard takes charge You will not be directly examined on these years in the exam however it is important that you appreciate that these years saw the triumph of old style and rather unimaginative communism. Khrushchev was succeeded by Leonid Brezhnev (1964 - 1982) who had no interest in reform. There was no return to Stalinist terror but there was a renewed censorship of literature (Solzhenitsyn was expelled from the Soviet Union ) and national minorities were once again forced to abandon their ancient traditions and learn Russian language and culture. When Brezhnev (who had been ailing for some years) died in 1982 he was succeeded by Yuri Andropov. However in 1984 Andropov died and was succeeded by the desperately ill Konstantin Chernenko who was dead by 1985. 5: The decline and fall of the communist state: the role of Gorbachev 1999: Why were many Soviet citizens dissatisfied with Soviet government policies in the early 1980's? (5) 2001: Why did President Gorbachev face many problems when he became leader of the Soviet Union in 1985? ...read more.

The first to demand that Soviet troops withdraw were Lithuania, Estonia and Latvia (the Baltic states), while elsewhere in the Ukraine, Belarus and Georgia calls for independence reached a peak. Even Russia, under its new president, Boris Yeltsin, urged the dismantling of the Soviet Union and independence for its constituent parts. Gorbachev was now faced with opposition from all sides. Communist hard-liners believed that he had been responsible for the breakdown of the Soviet empire, while radicals blamed him for not granting full independence to the constituent parts of the Soviet Union. Indeed they pointed out that 14 people had been killed when Gorbachev had ordered Soviet troops to attack the television tower in Vilnius, the capital of Lithuania. The trigger for the collapse of the Soviet Union was the August 1991 coup. In August 1991 hard-line communists seized control of Gorbachev, whilst he was holidaying at his country dacha. They immediately announced that they would restore order and halt Gorbachev's reforms. However the new Russian leader, Boris Yeltsin, was having none of this and utterly condemned the coup. Standing on a tank he called on the Soviet military to mutiny and for the workers to overthrow the coup. His brave stance worked and the coup collapsed. Gorbachev was reinstated but he had clearly been upstaged by Yeltsin. In the following months the fifteen member states of the Soviet Union all declared their independence and in December 1991 Gorbachev resigned as general secretary of the communist party. In its place the commonwealth of independent states, with Boris Yeltsin's Russia by far the biggest and most influential nation. The nationalities had won! The Soviet Union collapsed because Gorbachev failed to keep his promises of reform and in the end did not receive any financial aid from the West. All of his policies angered some element of soviet society and none pleased everyone. His attempts to preserve the Soviet Union and the Communist Party proved to be his downfall. They could not be pres ...read more.