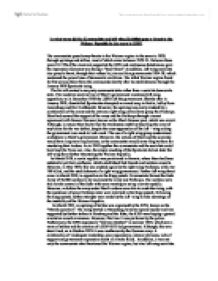 In what ways did the Communists and left-wing Socialists pose a threat to the Weimar Republic in the years to 1929? The communists posed many threats to the Weimar regime in the years to 1929, through uprisings and strikes, most of which came between 1919-23. Between these years 10-15% of the electorate supported the KPD and continuous disturbances gave the impression Germany was facing a "Red Threat" .In addition, left-wing socialists also posed a threat, through their refusal to join coalition governments 1924-28, which weakened the power base of democratic coalitions. The infant Weimar regime faced its first serious threat from the communists shortly after its establishment, through the January 1919 Spartacist rising. The far-left wanted a one party communist state rather than a socialist democratic state. The moderate socialist line of Ebert's government awakened left-wing opposition, so in December 1918 the USPD left the government. ...read more.

In March 1919, a soviet republic was proclaimed in Bavaria, where there had been substantial political confusion, which established Red Guards and workers councils. However, in May 1919, this was crushed again by the right-wing Freikorps, with over 700 killed, and the establishment of a right-wing government. Further left-wing threat came in March 1920, in opposition to the Kapp putsch. Communists formed the Ruhr Army of 50,000 workers to try and resist the army and Freikorps. The workers were able to take control of the Ruhr with some wanting to set up a soviet republic. However, as before the army under Ebert's orders were able to crush the rising, with the assistance of some Freikorps who were involved in the Kapp putsch. Following the Kapp putsch, further attempts were made by the left- wing to take advantage of the instability of the Weimar Republic. In March 1921, an uprising of strikes was organised by the KPD, known as the "March operation". ...read more.

Consequently, the SPD stayed out of unstable government coalitions in the year's form 1924 to 1928. Thus weakening the power base of those democratic coalitions, this saw further instability in Weimar, by allowing other extreme parties gain support. Through several strikes and uprisings the Communists were able to pose some threats to the Weimer Regime up to 1929. The Spartacist rising was their best opportunity to stage a revolution, however, they failed and a further twenty-three uprisings failed. Therefore, the left-wing challenges did not seriously challenge the Weimar government but did assist in diminishing many Germans confidence in the government. Moreover, the divisions between left-wing socialists and moderate socialists paved the way for extreme parties on the right to increase their support, which posed a serious threat to Weimar democracy. It is therefore, evident that the left-wing missed the best opportunity to seize power in 1919. Thereafter, they lacked the sufficient leadership and coherent planning, to seriously threaten democracy. However, there actions did reveal, weakness within the government: who needed to resort to the right-wing for help. ...read more.