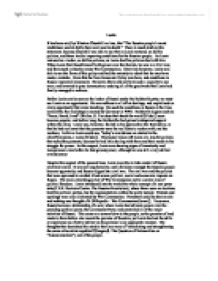 Lenin and his life

Lenin It has been said, by Winston Churchill no less, that "The Russian people's worst misfortune was his birth; their next was his death." There is much truth in this statement, because Churchill was able to see that as Lenin matured, so did his policies, and these lead to improving conditions for the Russian people. As Lenin matured as a leader, so did his policies; as Lenin died his policies died with him. When Lenin first found himself with power over the Soviets, he was in a Civil war, and from such a situation arose War Communism. Over time however, Lenin was able to see the flaws of this policy and had the maturity to admit that he may have made a mistake. From this the New Economic Policy was born, and conditions in Russia improved immensely. However, Stalin did not have such a capacity to see error, and reverted to pure communism, undoing all of the good work that Lenin had finally managed to achieve. Before Lenin can be seen as the leader of Russia under the Bolshevik party, we must see Lenin as an opportunist. He was ruthless in all of his dealings, and capitalised on every opportunity that came knocking. He used the conditions in Russia at the time, namely the fear and despair created by Germany in WWI. ...read more.

He had faced opposition from outside of what he controlled, and defeated it, yet he had not even begun to look at things within his power. The efforts of both the White Army and the Red Army had seen the peasants of Russia hard pressed for both food and new recruits. This pressure manifested itself in the Tambov Rebellion, amongst the peasants, and even more so in the Kronstadt Rebellion of March 1921. The rebellion in the military barracks full of some of his most loyal supporters had a shocking effect on Lenin. It was here that Lenin realised that: This peculiar situation demands of us an ability to adopt ourselves...(Russian Revolution. Lenin in October 1917 [www]) This is the time when Lenin realised that his revolution had created a new kind of peasant in Russia, one that was previously politically oblivious for so long, but had been thrown into the throes of political awareness (Russian Revolution. Lenin in October 1917 [www]). Lenin had shown them that they had the power to get what they wanted, and had started on the path to get what Lenin had promised them in the beginning: "Land, Bread, Peace". It was this realisation, this development in maturity that led Lenin to create and introduce the New Economic Policy in the hopes of giving the peasants what they wanted, while staying in power and driving Russia towards true communism. ...read more.

suffering of the Russian people, and a return to the neglect of a leader who did not have the depth of character to see his own flaws. Over fifty years the Russian people have achieved much, and endured much. An industrial transformation in history from Lenin's victory of the civil war to a personal freedom that was greater than at any time under Tsar Nicholas." (Welles ,O. Ten days that shook the world [Video]) This was Lenin's life. He had achieved this for the Russian people while he was alive. However, with his death, the years of suffering and tragedies became for naught, and very soon the peasants of Russia were once again locked in a perpetual stranglehold with no means of escape. In his lifetime, Lenin had proved that he was a wise leader, who had great depth of character. It has been said that "a wise communist will not be afraid of learning from a capitalist". (Lenin's NEP [www]) Lenin proved that he was both very wise and brave, for embracing aspects of capitalism while still retaining his overriding ideals. He was one of the only leaders in history that was able to create policies that suited his people, not who tried to change his people to suit his policies, and for this he will always be remembered as a unique man, who led a people to a new level of freedom, albeit it short lived. ...read more.