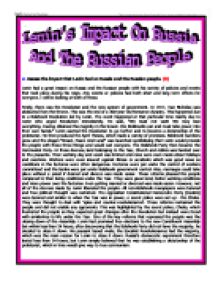 Lenin's Impact On Russia And The Russian People.

. 2. Assess the impact that Lenin had on Russia and the Russian people. (8) Lenin had a great impact on Russia and the Russian people with his variety of policies and events that took place during his reign. Any events or policies had both short and long term effects for everyone. I will be looking at both of these. Firstly, there was the Revolution and the new system of government. In 1917, Tsar Nicholas was abdicated from the throne. This was the end of a 300-year-old Romanov dynasty. This happened due to a Bolshevik Revolution led by Lenin. The event happened at that particular time mainly due to Lenin who urged Revolution immediately. He said, "We must not wait! We may lose everything...having obtained the majority in the Soviet...the Bolsheviks can and must take power into their own hands." Lenin wanted the Revolution to go further and to become a dictatorship of the proletariat. He then produced the April Theses, which made a variety of promises. Bolshevik numbers grew and the slogan "Bread, Peace And Land" was launched symbolising that Lenin would provide the people with these three things and would suit everyone. ...read more.

Lenin's activities in 1917-18 were bound to make him enemies. In August 1918, he was even shot three times by a Social Revolutionary agent, Dora Kaplin, but had a miraculous escape. In December, he set up a secret police force - the Cheka - to crush his opponents. The Civil War even resulted in the execution the Tsar and his family. This was because on 17th July 1918, White forces were approaching Ekaterinburg where the Tsar was being held. The Bolshevik commander ordered the execution, as Lenin could not risk the Tsar's being rescued and returned as leader of the Whites. In an amazingly short time, a new Red Army of over 300,000 men was created. Their loyalty was ensured by holding their families' hostage and appointing political commissars to watch over them. The Cheka made sure that nobody in Bolshevik territories co-operated with the Whites. There were many beatings, hangings and shooting of opponents or even suspects in what became known as the Red Terror. Red Terror was also used against those suspected of counter-revolution and sabotage e.g. priest, clergymen, army officers, bourgeoisie, Socialist Revolutionaries. Another method used to win the war was propaganda. ...read more.

Once it had been initiated, there was no longer a Black Market. As food production has increased, people were no longer selling and exchanging goods in order to acquire some food. There was enough for people to survive on. The NEP had many long-term effects. Firstly, Stalin ended the NEP once he came into power as he deemed it as not being effective enough. Secondly, Stalin agreed that something needed to be done so he introduced the GOSPLAN, which paved the way for the 5 Year Plans, as this would ensure quick results. Stalin, somewhat went back to the event of War Communism by wiping out the kulaks during collectivisation. In conclusion, Lenin finally promoted Stalin to Secretary General having been impressed by his hard work and loyalty. However, it was only after Lenin's fatal strokes that he realised just what sort of leader Stalin would make but by then it was too late. The competition of who would succeed Lenin left Stalin to plot his way to power. Although Lenin described Stalin as "too rude" and questioned his ability as a leader, after his death officials decided not to make his statement public therefore people were never fully aware of Lenin's real opinion of Stalin. In the end, Stalin became the supreme leader of the USSR and Lenin was unable to challenge it. ...read more.