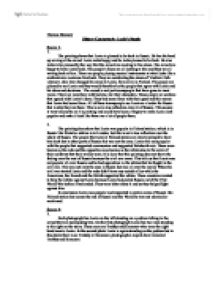 Thomas Henesey History Coursework: Lenin's Russia Source A 1. The painting shows that Lenin is pleased to be back in Russia. He has his hand up waving at the crowd. Lenin looks happy and he looks pleased to be back. He also looks to be pleased by the way that the crowd are reacting to his return. The crowd are happy to have Lenin back. The people's faces are all looking at him and they are all waving back at him. There are people playing musical instruments at what looks like a celebration to welcome him back. They are celebrating the return of Vladimir Ilich Ulyanov, who later changed his name to Lenin, from exile in Finland. The people are pleased to see Lenin and they would therefore be the people that agree with Lenin and his ideas and decisions. The crowd is not just townspeople that have gone to meet Lenin. There are men there with bullets over their shoulders. These people are soldiers that agreed with Lenin's ideas. They had some force with their guns and this means that Lenin had some force. All of these townspeople see Lenin as a leader for Russia that is why they are there. This is not a true reflection over all of Russia. This source is very inaccurate as it is painting and could have been a forgery to make Lenin look popular and make it look like there are a lot of people there. 2. The painting does show that Lenin was popular in Finland station, which is in Russia like Waterloo station is in London, but this is not a true reflection over the whole of Russia. The people that were at Finland station are clearly pleased to have him back but in other parts of Russia this was not the case. Lenin was only popular with the people that supported communism and supported Bolshevik rule. ...read more.

This means that he didn't think that they would be capable of running the country. Lansing says that the country wouldn't end up further developed. Which indicates that there is no point in fighting. To stop the problem they should get a government and a legal system. To advance his speech he hammers home his point that there is no authority or control. He continues to say that the country is full of anarchy and violence. He gives a comparison to a cauldron as though it is waiting to overflow, it is boiling up nicely. Finally he thinks of the people of Russia and how they will be affected by the war. He gives the sense that he feels sorry for the things that will happen to them. Robert Lansing's attitude was that Russia would be worse off if the Bolsheviks took control of all Russia. His view is not necessarily correct, as Robert Lansing has biased opinion due to the fact that he was the US Secretary of State for Foreign Affairs. He has a bad attitude towards Russia because they pulled out of the First World War. The Americans would be bitter and wouldn't support anything that the Russians do. 6. (ii) When Robert Lansing said the words 'Russian Terror' he was referring to the pain that Russian people would feel. By terror he means that blood will be shed and life will be lost. He thinks that the death rate and property destruction will be higher than the French Revolution. He is saying that people have a hard time ahead of them if they live in Russia. Source E 7. This source comes from Winston Churchill at the time when he was the British Secretary of War and Air. Churchill has a very definite opinion of the Bolsheviks and there ideas, he doesn't support them at all. You can tell from the first sentence he said 'the Bolshevik Tyranny is the worst'. This is a very hard statement to take in. ...read more.

This source tells that the government didn't have a lot of friends outside of the country. Lansing was an American and they were a major power but Lenin didn't have their support as you can see from this statement. The statement written by Robert Lansing is a biased account though as the Americans were fighting the First World War with Russia until they pulled out and so there would be some bitterness between the two countries. Source E This source came from Winston Churchill. This again tells that Lenin was not popular outside of Russia. It gives a comparison to the Kaiser. If Lenin were thought of like the Kaiser then he would be hated like the Kaiser. Churchill gives a good comparison but his opinion is biased and should be not be used as fact it is only an opinion. Source F The final source gives reasons why Lenin was unpopular. This source is taken from a textbook and therefore will be correct. It gives facts why Lenin was not popular; economic collapse, Industrial production had dropped by 20 per cent of the level it was in 1913, harvest produced only 60 per cent of the normal amount and during the civil war famine and disease caused 8 million deaths. These facts give hard evidence why the Russian people have cause to not like Lenin. All of these sources tell us that Lenin and the Bolsheviks popularity changed over the time they were in power. If we can trust the early sources you would believe that he was popular. In 1917 Lenin would have been popular as the country was in disarray and would have supported any leader. However as his time went on the true view of Lenin came out. Towards 1924 he started to go down hill and wasn't as respected by the people. When source F gives the final facts of what was happening it is easy to say that Lenin was not as successful as first thought. Lenin early high popularity dropped towards the end of his time to be hated by the people of Russia. ...read more.