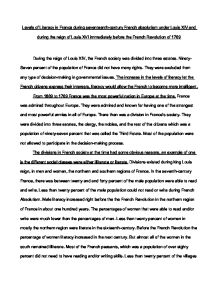 Levels of Literacy in France during seventeenth-century French absolutism under Louis XIV and during the reign of Louis XVI immediately before the French Revolution of 1789 During the reign of Louis XIV, the French society was divided into three estates. Ninety-Seven percent of the population of France did not have many rights. They were excluded from any type of decision-making in governmental issues. The increase in the levels of literacy let the French citizens express their interests, literacy would allow the French to become more intelligent. From 1689 to 1789 France was the most powerful nation in Europe at the time. France was admired throughout Europe. They were admired and known for having one of the strongest and most powerful armies in all of Europe. There then was a division in France's society. ...read more.

The increase of literacy of the people created a revolutionary situation. A French bishop wrote a letter mentioning that education will help people get out of poverty. School will educate the children things such as learning how to read and write and engaging in commerce. This will allow the children to pull themselves out of poverty and get a good job. The education of the French peasants, women and others would be limited on their occupations. The superintendents of schools in France wanted to stop the spread of literacy. The skill of reading and/or writing spread and increased in France From the year 1689. The peasants, women, artisans understand their place and can possibly read about being in a different social class. They were able to have revolutionary writers and they could spread and express their ideas. Reading and writing became the reason for success in the French revolution. ...read more.