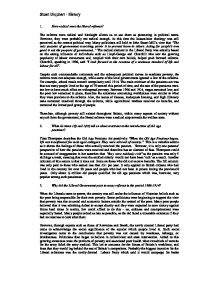 The reforms were radical and hindsight allows us to see them as pioneering in political terms.  However, they were probably not radical enough. At this time the laissez-faire ideology was still perceived as the correct political way. Many politicians still held to John Stuart Mill’s view that "The only purpose of government exercising power is to prevent harm to others. Acting for people's own good is not the purpose of government..” The radical element in the Liberal Party was actually based on the strong influence of individuals such as Lloyd-George and Churchill who saw the growing popularity of labour movements and, coupled with their own beliefs, helped push forward reforms. Churchill, speaking in 1906, said "I look forward to the creation of a minimum standard of life and labour for all".

Despite such commendable comments and the subsequent political moves to eradicate poverty, the reforms were not adequate enough, while some of the local governments ignored a few of the reforms. For example, school meals weren't compulsory until 1914. The main criticism of the pensions act was that not many people lived to the age of 70 around this period of time, and the rate of the pensions were too low to have much effect on widespread poverty. Between 1906 and 1914, wages remained low, and the poor law remained in place, therefore the situations concerning workhouses were similar to what they were previous to the reforms. Also, the issues of disease, inadequate housing, and high illiteracy rates remained unsolved through the reforms, while agricultural workers received no benefits, and remained the lowest paid group of people.

Therefore, although poverty still existed throughout Britain, within many aspects of society without any aid from the government, the liberal reforms were a radical step towards the welfare state.

Flora Thompson describes the Old Age Pensions Act positively: "When the Old Age Pensions began, life was transformed for such aged cottagers. They were relieved of anxiety."  This is a valuable source as it shows the feelings of those who actually received the pension.  However, it is only one persons' perspective of how the pensions were received and therefore has an element of bias. Thompson could be accused of exaggeration in her assertion that  "they were suddenly rich" as the pension was only 5 shillings a week, meaning that even the entitled elderly  would not have been ‘rich’ as a result. Another criticism of this source is that it does not  focus on those who did not receive benefits. The full amount was only paid to those who earned less than £21 per year. It only applied to British citizens who had lived in the country for over 20 years and people who had not been in prison during the previous10 years.  Only about ½ million old people qualified for old age pensions which was, however, very popular among such pensioners.

When the Liberals came to power, the country was still under the influence of Victorian beliefs such as the poor being responsible for their own poverty. Some politicians were beginning to support the view that poverty was due to social and economic factors outside the control of the poor. Many poor people believed that it was admitting defeat to accept charity and they were expected to save money against future hard times In reality, few could afford to do this – so, sickness and unemployment were especially feared. Many people retired as late as possible, as the old faced a miserable existence if they had no relatives to look after them

However, through reports such as those of Rowntree and Booth, the newly elected Liberal party had come to acknowledge the social significance of the squalor which people lived in. Such social investigators came to the conclusions that poverty was not caused by weakness, lethargy, or drunkenness. Politicians then began to believe in collectivism and state intervention. Added to this growing awareness were the products of poverty and associated poor health when two-thirds of recruits for the army failed the army medical. This led to concerns for the fitness of Britain’s workforce, and fears that they would lag behind the rest of Britain’s competitors. Probably the biggest incentive for the Liberal reformers was the newly-formed  Labour Party which said it would campaign for better working and living conditions for the working people – the Liberals were worried that they might lose votes and members to this new party if they did not do something about poverty and hardship.

4.        Give arguments for and against  the view that Asquith and not Lloyd George should be

“All social reformers since 1911 have stood on Lloyd George’s shoulders” is typical of the view that history paints of David Lloyd George who is very much associated with reforms that benefited the majority of society. Reforms such as the Old Age Pensions Act of 1908 and the National Health Insurance Act of 1911 did much to aid the poorest in society and, therefore, the most vulnerable. Lloyd George, it was, who helped to set-off the clash between the House of Commons and the House of Lords through his 1908 ‘People’s Budget’ and its plan to introduce a super tax on the rich to help pay for more reforms that would be used to advance the lifestyles of the poor. The Lords rejected the budget and this lead to the clash that resulted in the passing of the Parliament Act of 1911 which stated that the Lords only had the power to delay any act passed by the Commons - the Lords could reject a passed act by the Commons three times, but after this it became law anyway.  Whilst accepting the historical and social importance of Lloyd George who was a dedicated reformer and (together with Churchill) a radical politician, it is clear that without the support of Asquith it would not have been possible to push through his reforms against the opposition of ‘old’ liberalism.

It is too easy to discard Asquith when discussing Liberal reforms. Whilst Asquith was not a committed 'New Liberal' he did support many of their policies. Though a deeply entrenched  'old Liberal' he supported the new Liberalism where it stayed closest to traditional principles. Anything that seemed like socialism was treated with the utmost suspicion. In this respect he can be seen as typical of his party. Though, unlike Lloyd George, Asquith was not an ideological innovator but he did get things done. Many Liberal reformers had been held up by a conservative (and Conservative) House of Lords and Asquith was strong enough to force through the Parliament Act that finally broke its power.  Asquith’s personal commitment to social reform has probably been overestimated, he was one of the last of the old style Gladstonian Liberals, yet his agreement to reform was at least as important as any support he gave it. He aided by not frustrating the reforms plans.  In no way can Asquith be credited to the same degree as Lloyd George but he remains important because his acceptance by the Commons – who were wary of Lloyd George and Churchill – and his personal determination, helped push through the reforms.