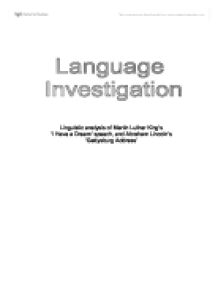 Linguistic analysis of Martin Luther King's 'I Have a Dream' speech, and Abraham Lincoln's 'Gettysburg Address' I have chosen to investigate the use of linguistic devices and how they are used to persuade the audience. I will study a spoken form of language, as I think the spoken mode illustrates emotion better than a written mode. The speech I have chosen to study was spoken by Martin Luther King in 1963, and has been given the popular name of 'I Have a Dream'. I will also look at the Gettysburg address, spoken by Abraham Lincoln in 1863, as this links in closely with Martin Luther King's ideals, and is referred to in his speech. Martin Luther Kings 'I Have A Dream' speech is a very moving and interesting speech as it symbolises Freedom of Speech. It is rousing, motivational and filled with emotion. The aim of my investigation is to see how Martin Luther King uses language to create a speech of this nature that will persuade the audience to support the Civil Rights movement in America. It has become almost an defining moment for the cause. Alongside King's speech, I have also chosen study the similarities between King's speech and Abraham Lincoln's 'Gettysburg Address', as Martin Luther Kings refers to this in his speech, and are related as both aim to promote peace and equality. As this is much shorter speech, I will be looking at it in less depth. I have chosen to look at King's speech because it is an example of how the power of speech can instigate such powerful emotions and cause monumental changes. I am interested in how this was achieved using linguistic features in this speech. The Gettysburg Address is also a very important speech, and the speaker, Lincoln, is admired by many. I will keep an open mind while studying these speeches, and won't be biased about either of the speakers. ...read more.

By mentioning an exact length of time, he is making the speech more realistic and believable, and as the length of time is a hundred years, the words are shocking to the audience since that is a very long time. 'One hundred years later' is repeated 3 more times in different contexts in the next paragraph, which makes it memorable to the audience. This linguistic device is used throughout the speech, sometimes replacing 'but' with 'and'. Very negative utterances are used in the same paragraph to describe the present and historic circumstances of n*****s. Lexis such as 'crippled',' poverty', and 'exile' are spoken. The use of such emotive language is used to draw attention to their plight, and to attract sympathy so people might support their cause, which connects with the purpose of the speech. He refers to the two different visions of experiences of black Americans - past slavery and future freedom. Describing the past slavery he uses negative language and in contrast to that, positive lexis is used to describe freedom, such as 'majestic', 'invigorating', and 'hope'. Again metaphoric language is used, but in a negative way 'The life of the n***o is still sadly crippled by the manacles of segregation and the chains of discrimination' This reference to 'manacles' and 'chains' refers to the history of black slavery again captures the audience's imagination and retains their interest. The range and power of images that Luther King creates using rhetorical language highlights the subjugation of n*****s - still suffering in the modern world. The manacles and chains are no longer visible, physical restraints, but part of a mindset This sentence is very phonetically memorable because of the rhyme between 'segregation' and 'discrimination'. This also helps the rhythm of the speech. The conjunction 'and' is also used here, to join two relevant pieces of information. Martin Luther King uses sophisticated higher order lexis, such as 'promissory' and 'gradualism', to show he is educated and capable of speaking for this cause. ...read more.

This part of speech begins with: "Let us not wallow in the valley of despair, I say to you today, my friends." Luther King groups himself with the audience, using the pronoun 'us'. He also addresses them as 'my friends, which promotes togetherness. The next part of the speech is where the known phrase, 'I have a dream' stems from. He uses repetition to create structure and rhythm, and to engage his listeners. Repetition of the words 'I have a dream', and the examples he gives, get adrenalin flowing in his audience and prompt a strong emotional, rousing response. The structure of this part of speech is that repeating the phrase 'I have a dream.' King states what his vision of a new America will be. He confirms that he respects and is proud of America by saying his dream is 'deeply rooted in the American dream'. First of all he states his dream is realising a quote from the Declaration of Independence: "We hold these truths to be self-evident, that all men are created equal." The quotation adds authenticity to his speech, the fact that it is not just Luther King visioning equality, but the respected and cherished men who signed the declaration. The next part is: "I have a dream that one day on the red hills of Georgia, the sons of former slaves and the sons of former slave owners will be able to sit down together at the table of brotherhood". He uses the state of Georgia as an example, as that was a place where r****m was evident. He imagines that n*****s and Whites are at peace. He expresses this using a metaphor that they will be together at the 'table of brotherhood' "I have a dream that one day even the state of Mississippi, a state sweltering with the heat of injustice, sweltering with the heat of oppression, will be transformed into an oasis of freedom and justice" Luther King describes the state of Mississippi as 'sweltering with the heat of injustice...heat of oppression'. ...read more.