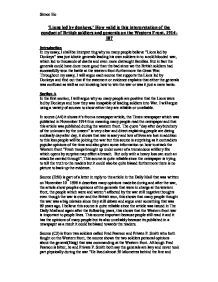 'Lions led by donkeys.' How valid is this interpretation of the conduct of British soldiers and generals on the Western Front, 1914-18? Introduction In my essay, I shall be interpret ting why so many people believe "Lions led by Donkeys" was just idiotic generals leading his own soldiers in to a cold blooded war, which led to thousands of deaths and even more distraught families. But in fact the generals could have done more good than the bad since we the British soldiers had successfully won the battle at the western front furthermore the Great War. Throughout my essay, I will argue each source that supports the Lions led by Donkeys and find out that if the statement or evidence explains that either the generals was confused as well as not knowing how to win the war or was it just a mere tactic. Section A In the first section, I will argue why so many people are positive that the Lions were led by Donkeys and how they was incapable of leading soldiers into War. I will argue using a variety of sources to show either they are reliable or unreliable. In source (A4) it shows it's from a newspaper article, the Times newspaper which was published in November 1914 thus meaning many people read the newspaper and that this article was published during the western front. ...read more.

I believe this source is reliable to a certain point because both men were probably under command by General Haig at some point during war. However it could be argued both sources are bitter and it's their interpretation, but it is possible that these men could hold a grudge against Haig because he never took part in war physically and also he received an Earl and 100,000 pounds. I believe this source is very reliable because it's to opinions of men which had both been in the war and they didn't like the conditions their general forced to fight in. This source supports the argument that the soldiers were "Lions led by Donkeys. Finally source (c2) shows the official figures, issued in 1920 just after the war. The source shows that most soldiers during the war had died at the western front meaning that either the soldiers lagged or generals was not doing their job correctly; compared to the other fronts most men had died in the Western front. The source is very reliable because they are official figures in August 1914 - 30 November 1919. Section B Although many people argued that "Lions led by Donkeys" were in actual fact true but some believed it was an invalid interpretation and that the generals indeed tried their best throughout the war. I will be analysing each statement and source to see how they are reliable and unreliable as well as how they relate to "Lions led by Donkeys". ...read more.

Source (B4ii) Haig gives his own opinion on how the battle went which were Germans have surrendering freely and the troops are full of confidence. Haig's opinion was published the day after the battle which makes his opinion very reliable but also it is unreliable because his opinion which could be biased since on the first day Haig lost approximately 60,000 soldiers, which could make Haig's statement a lie; to make him sound like a good general. Finally source (D5i) was a newspaper article written by a military historian and was published in The Daily Mail; which is very popular and many people read. Military historian, John Keegan describes all the positive things to stop the readers and mainly families that have grudges towards the generals but instead they should be cherishing he generals since they had tactics which lead us the British army to victory. I believe that this source is very reliable because it speaks about all the truth that the generals had done but unreliable for the reason that there maybe biased towards the generals side. In conclusion there cannot be a right answer because the question is based purely on opinion. I believe the Generals were not donkeys because Haig must have been good because we won the war. And at the time the tactics they used by keep on sending men didn't work but no one new a different way. ?? ?? ?? ?? Simon Ho ...read more.