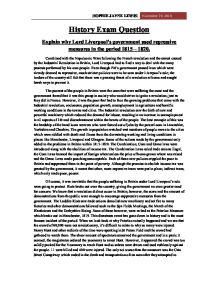 History Exam Question Explain why Lord Liverpool's government used repressive measures in the period 1815 - 1820. Combined with the Napoleonic Wars following the French revolution and the unrest caused by the Industrial Revolution in Britain, Lord Liverpool had to find a way to deal with the many protests performed by his own people. Even though Pitt's government passed laws which were already deemed as repressive, much stricter policies were to be seen under Liverpool's rule; the leaders of the country still felt that there was a pressing threat of a revolution at home and sought harsh ways to prevent it. The poorest of the people in Britain were the ones that were suffering the most and the government feared that it was this group in society who would strive to ignite a revolution; just as they did in France. However, it was the poor that had to face the growing problems that came with the Industrial revolution; enclosures, population growth, unemployment in agriculture and horrific working conditions in the towns and cities. ...read more.

Each of these new policies crippled the poor in Britain and suppressed them to the point of poverty. Although the promise to abolish income tax was granted by the government, it meant that other, more expensive taxes were put in place; indirect taxes, which only made poor, poorer. Of course, it was inevitable that the people suffering in Britain under Lord Liverpool's rule were going to protest. Riots broke out over the country, giving the government an even greater need for concern. We know that a revolution did not occur in Britain; however, the scare and the amount of demonstrations from the public were enough to encourage suppressive measures from the government. The Luddite Riots saw trade unions demolish new machinery and set fire to many factories and other demonstrations followed such as the Spa Fields Meetings, the March of the Blanketeers and the Derbyshire Rising. None of these however, were as bad as the Peterloo Massacre which broke out in Manchester, 1819. ...read more.

Habeas Corpus was suspended once more in 1817 allowing the government to arrest those who had not even committed an offense for an indefinite period of time and the six acts were put in place. Each of these measures resulted in the suppression of the citizens of Britain; especially the six acts which gave magistrates the permission to search houses without warrants, allowed the stamp duty to be increased and prevented gatherings of large amounts of people. It seemed that this period of time accepted no freedom for the people of Britain for the fear of a revolution. Any acts against the government could be punishable by death so that repression was an everyday chore the poorest in the country had to acknowledge. It was really just the worry that what happened in France would be replicated in Britain. The government felt that suppressive policies were the only way forward in this period of time. ?? ?? ?? ?? [SOPHIE JAYNE LEWIS] November 29, 2010 ...read more.