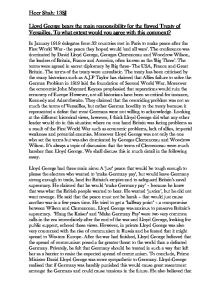 Lloyd George bears the main responsibility for the flawed Treaty of Versailles. To what extent would you agree with this comment?

Heer Shah: 13SJ Lloyd George bears the main responsibility for the flawed Treaty of Versailles. To what extent would you agree with this comment? In January 1919 delegates from 32 countries met in Paris to make peace after the First World War - the peace they hoped would 'end all wars'. The conference was dominated by David Lloyd George, Georges Clemenceau and Woodrow Wilson, the leaders of Britain, France and America, often known as the 'Big Three'. The terms were agreed in secret diplomacy by Big three- The USA, France and Great Britain. The terms of the treaty were unrealistic. The treaty has been criticised by the many historians such as A.J.P Taylor has claimed that Allies failure to solve the German Problem in 1919 laid the foundation of Second World War. Moreover the economist John Maynard Keynes prophesied that reparations would ruin the economy of Europe However, not all historians have been so critical for instance, Kennedy and Adamthwaite. They claimed that the overriding problem was not so much the terms of Versailles, but rather German hostility to the treaty because it represented a defeat that most Germans were not willing to acknowledge. Looking at the different historical views, however, I think Lloyd George did what any other leader would do in this situation where ...read more.

Lloyd-George realised that if Germany was harshly punished this would cause great resentment amongst the Germans and could cause tensions in the future. He also believed that a strong Germany would be a good trading partner for Britain, and that a healthy German economy would prevent the rise of extremist parties either Communists or Fascists. On the other hand Lloyd-George had to listen to British public opinion which was calling for 'make Germany pay'. The aims of Lloyd George and Clemenceau were distinctively opposite in terms of their ideologies and what they wanted. Georges Clemenceau of France had one very simple belief - Germany should be brought to its knees so that she could never start a war again. This reflected the views of the French public but it was also what Clemenceau himself believed in. He had seen the north-east corner of France destroyed and he determined that Germany should never be allowed to do this again. In 1871, France had lost Alsace Lorraine and had been forced to massive reparations. French causalities between 1914 and 1918 were the highest sustained by the allied powers. The other great victorious power was the USA. Led by President Woodrow Wilson, the Americans had no great desire to punish the Germans. ...read more.

Many historians see him as charting a tricky and skilful course at Paris in 1919 between the opposing views of Clemenceau and Wilson. However, at the same time He is trying with great success to preserve British Interests. Moreover, Lloyd Geroge secured the best deal available at the time and reckoned on the terms being revised later. As claimed earlier, the terms that has been set Lloyd could have been more harshly by any other prime minister that time under circumstances where the Britain has not even recovered by the losses of First World War for instance, the financial crisis. The economic and financial crisis meant that there was growing disparity Britain's global commitments. In 1919, 30 percent of Britain's government expenditure had been on defence. At this time it was best to put the terms and improve the interests of Britain. The aims of Lloyd Geroge were seen as less inconsiderate than the aims of Clemenceau. France had lost some 1.5 million military personnel and an estimated 400,000 civilians to the war and much of the western front had been fought on French soil. To appease the French public, Prime Minister Georges Clemenceau wanted to impose policies deliberately meant to cripple Germany militarily, politically, and economically so that it will never be able to invade France again. Historian Adamthwaite sees Versailles as 'a brave attempt to deal with intractable, perhaps insoluble problems'. ...read more.