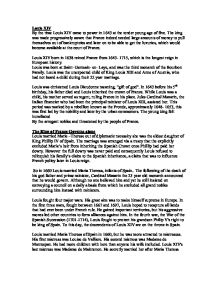 Louis XIV By the time Louis XIV came to power in 1643 at the tender young age of five. The king was made progressively aware that France indeed needed large amounts of money to pull themselves out of bankruptcies and later on to be able to get the luxuries, which would become available at the court of France. Louis XIV born in 1638 reined France from 1643- 1715, which is the longest reign in European history. Louis was born at Saint- Germain- en- Laye, and was the third monarch of the Bourbon Family. Louis was the unexpected child of King Louis XIII and Anne of Austria, who had not beard a child during their 22 year marriage. Louis was christened Louis Dieudonne meaning, "gift of god". In 1643 before his 5th birthday, his father died and Louis inherited the crown of France. While Louis was a child, his mother served as regent, ruling France in his place. Jules Cardinal Mazarin, the Italian financier who had been the principal minister of Louis XIII, assisted her. This period was marked by a rebellion known as the Fronde, approximately 1648- 1653, this was first led by the nobility and later by the urban commoners. ...read more.

They never had any children. She was very religious and she believed it was here duty to save the kings soul. She worked hard to make Louis more religious and it seem that she succeed. Madame de Maintenon approved of Louis's harsh treatment of the French Protestants, who were called Huguenots. Since 1598, the Huguenots had enjoyed religious toleration and privileges under the Edict of Nantes. In 1685, Louis revoked this edict. The government persecuted the Huguenots savagely in an effort to compel them to change their religion. Many thousands of Huguenots fled the country. Those who left included numerous craftworkers and business people. At one point in Louis' life, he had a son, grandson, and 'The Century of Louis XIV' The First 20 years of the king's personal reign were the most astounding. Louis declared that he would rule France without a Chief minister, which was never done before. He intended to rule as an absolute monarch, believing that his power as king was derived from god. He took the sun as his emblems and connected himself to its radiant images. Portraits, woodcuts and engravings of the King portrayed as the Greek sun god Apollo poured from Parisian workshops. ...read more.

In 1676 another architect Jules Mardouin- Mansart was put in charge of redesigning and enlarging the building. There was much activity at Versailles between the years 1678 and 1684 Mansart direct building campaign which included the transformation of the marble court, the construction of the Minister' Wing, the southern wing and the Hall of Mirrors. The construction of Versailles was completed near the end of Louis XIV's life. The Chapel was built last and was finished after Mansart's death in 1708 by his son-in-law Robert de Cotte. The interior of the palace is richly decorated. The most famous rooms include the living quarters of the king and queen, the Room of Hercules, and the Hall of Mirrors. The Hall of Mirrors, designed by Charles Le Brun, was begun in 1678. It is a long hallway lined with mirrors that runs along the front of the palace. The ceiling is decorated with paintings glorifying the achievements of Louis XIV. The palace also contains a magnificent royal chapel and a private theater. The French Revolution of 1789-1799 led to the overthrow of the French king. Mobs invaded the palace during the revolution and removed or destroyed most of the furniture and art. Little was done to maintain the building until the early 1900's, when restoration work began. This project is still going on. ...read more.