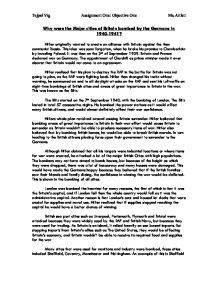 Major cities of Britain bombed by the Germans

Hitler originally wanted to create an alliance with Britain against the then communist Russia. This idea was soon forgotten, when he broke his promise to Chamberlain by invading Poland. It was then on the 3rd of September 1939. Britain and France declared war on Germany. The appointment of Churchill as prime minister made it ever clearer that Britain would not come to an agreement.

Hitler realised that his plan to destroy the RAF in the battle for Britain was not going to plan, as the RAF were fighting back. Hitler then changed his tactic without warning, he summoned an end to all daylight attacks on the RAF and sent his Luftwaffe on night-time bombings of British cities and areas of great importance to Britain in the war. This was known as the Blitz.

The Blitz started on the 7th September 1940, with the bombing of London. The Blitz lasted in total 57 consecutive nights. He bombed the power stations as it would affect many British citizens, and would almost definitely affect their war confidence.

Hitlers whole plan revolved around causing Britain surrender. Hitler believed that bombing areas of great importance to Britain in their war effort would cause Britain to surrender as Britain wouldn’t be able to produce necessary items of war. Hitler also believed that by bombing British homes, he would be able to break British morale. In turn leading to the British citizens placing force upon their government to surrender to the Germans.

Although Hitler claimed that all his targets were industrial locations or where items for war were created, he attacked a lot of the major British Cities with high populations. The bombers may not have aimed to bomb houses, but because of the height as which they were dropped, there was a lot of inaccuracy and many houses were damaged. This would have made the Germans happy because they believed that if the British families saw their friends and family dieing, the confidence in winning the war would be deflated. This is shown in the bombing of all cities.

London was bombed the heaviest for many reasons, the first of which is that it was the Britain’s capital, and if London fell then the whole country would fall as it was the administrative capital. Another reason is that London’s east end housed lot docks that were crucial for supplies and naval use. Hitler realized that if supplies stopped reaching the capital he would have a better chance of winning.

British sea port cities such as Liverpool, Portsmouth, Plymouth and Bristol were attacked because they were widely used by the RAF and British Navy, but because they were used for trading. As Britain is an island, it relied heavily on sea based imports. But stopping imports from Britain’s allies such as The United States, they would be affecting Britain’s economy, and Britain wouldn’t be able to receive its required food and supplies for the war

Many cities that were used for munitions and industry were bombed, these cities included Sheffield, Coventry, Manchester and Nottingham. An example of this is Sheffield which was the centre of all British steel industry was bombed because the Germans realized the importance of steel to Britain’s war effort. They knew its importance because steel was used for creating fighter planes, ships, and guns. Steel was also used on the railway, which was bombed to stop the transportation of items of war.

In conclusion Hitler bombed major British cities tactically for different reasons, which ultimately led to the defeat of the British. His main strategy was to make the British surrender, like he had done with the French, but he was unable to.