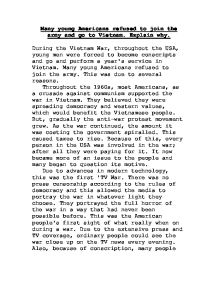 Many young Americans refused to join the army and go to Vietnam. Explain why.

Many young Americans refused to join the army and go to Vietnam. Explain why. During the Vietnam War, throughout the USA, young men were forced to become conscripts and go and perform a year's service in Vietnam. Many young Americans refused to join the army. This was due to several reasons. Throughout the 1960s, most Americans, as a crusade against communism supported the war in Vietnam. They believed they were spreading democracy and western values, which would benefit the Vietnamese people. But, gradually the anti-war protest movement grew. As the war continued, the amount it was costing the government spiralled. This caused taxes to rise. Because of this, every person in the USA was involved in the war; after all they were paying for it. It now became more of an issue to the people and many began to question its motive. Due to advances in modern technology, this was the first 'TV War. There was no press censorship according to the rules of democracy and this allowed the media to portray the war in whatever light they choose. ...read more.

Seeing these people returning in such a condition increased the determination of those people who were already campaigning for peace and discouraged new conscripts from joining. Out the many young men who tried to avoid conscription or The Draft, as it was known, most who succeeded were rich whites. This upset the poor and the blacks, a large percentage of the population. This was not the only bone of contention, with the increasing cost of the war; money was no longer being spent on policies such as the Great Society. This meant that the poor and the blacks would no longer have any money spent to improve their living conditions. Because the war had cost them so much, this section of society turned against the continuation of the war and refused to join the army and prolong a war they no longer supported. Because the USA was 'propping up' a corrupt dictator, it was hard for the US people and soldiers to believe in the rightness of the war. ...read more.

In 1968, the Vietcong launched the Tet Offensive. This was very successful and greatly increased the number of dead US soldiers. It was this sharp increase in the number of young Americans returning home in body bags that encouraged the American people that this war was no longer correct or just. America became split; those who wanted to end the war and others who felt that they were only losing the war because the peace protestors were undermining public confidence. The army itself blamed the press for creating images of the war in Vietnam that lost them support of the, both at home and among their troops. There were many different factors that threatened public support for the Vietnam war. It was a combination of all these factors the caused the growth of the Anti-War Protest movement. It was mainly this that led so many young men to refuse to join the army. The graphic press coverage and brutal reports of events in Vietnam, that reached the US public, convinced many ordinary people that they war was not justifiable and encouraged many men to spurn the government and refuse to go to Vietnam. ...read more.