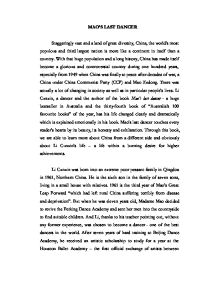 MAO'S LAST DANCER Staggeringly vast and a land of great diversity, China, the world's most populous and third largest nation is more like a continent in itself than a country. With that huge population and a long history, China has made itself become a glorious and controversial country during one hundred years, especially from 1949 when China was finally at peace after decades of war, a China under China Communist Party (CCP) and Mao Zedong. There was actually a lot of changing in society as well as in particular people's lives. Li Cunxin, a dancer and the author of the book Mao's last dancer - a huge bestseller in Australia and the thirty-fourth book of "Australia's 100 favourite books" of the year, has his life changed clearly and dramatically which is explained emotionally in his book. Mao's last dancer touches every reader's hearts by its beauty, its honesty and exhilaration. Through this book, we are able to learn more about China from a different side and obviously about Li Cunxin's life - a life within a burning desire for higher achievements. Li Cunxin was born into an extreme poor peasant family in Qingdoa in 1961, Northern China. ...read more.

China which was described as a country that "you don't have to lock your door at night", and the people, especially the author were considered as a frog at the bottom of the well. Part two - Beijing - is telling about a more distant horizon when he spent about 7 years studying and make interest in ballet. That is the place he made many of his lovely friends as well as the guidance, the great quality of his training and encouragements from his teacher and from this beautiful art. What Li most regrets about this time is "we squandered a lot of precious time on propaganda. We even stoped doing ballet classes for a few days because Mao had made a new saying and we had to study it over and over, chew it, regurgitate it - it's incredible the amount time we wasted"4. Cunxin's world became larger again when, as a young adult, he was given opportunity to travel to Houston to train with that city's ballet company - Part three, The West - now he could see clearly that lies of the Chinese authorities were just that. A richer and freer world existed with infinitely greater artistic freedom. ...read more.