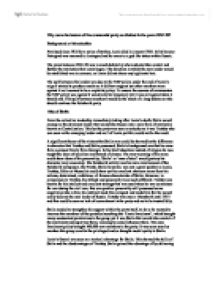 Why were the leaders of the communist party so divided in the years 1924-29? Background or introduction Paralysed since 1922 by a series of strokes, Lenin died in January 1924. In his honour Petrograd was renamed to Leningrad and he came to a god-like status within Russia. The years between 1924-29 was in much debate by whom should take control and further the revolution that Lenin began. The direction in which the new leader would be established was in concern, as Lenin did not chose any legitimate heir. The split between the leaders was due to the NEP policy, under the end of Lenin's reign it started to produce results so it did have support yet other members were against it as it seemed to be a capitalist policy. To ensure the success of communism the NEP policy was agreed it would only be temporary yet it was not agreed when it should end. This spilt between members would be the result of a long debate on who should continue the Bolshevik party. Rise of Stalin From the collective leadership immediately taking after Lenin's death, Stalin would emerge as the dominant leader that would take Russia into a new form of revolution known as Centralisation. ...read more.

Stalin gained the advantage of by delivering the oration at the funeral, making him the chief mourner. This showed he was a true friend of Lenin and had the leadership skills to become the new premier of Russia; Stalin made his full intention to continue the work of Lenin in his speech. In contrast Trotsky did not even turn up for the funeral. His reasons were poor and gave huge doubt on the Trotsky0Lenin relationship to the public. Another blunder that helped Stalin to gain the advantage over Trotsky was the failure of reading out the last testament that pictured Stalin as been negative for the job and the other leaders too, so it was decided by many leaders that it would not be read out. Trotsky came very unpopular in the party has he criticised the party for the growing beaurocracy and said that the spirit of the revolution was been lost. This attack affected the members as they felt they could lose power if he gained control so he created many enemies. This resulted in the Triumvirate of Stalin, Zinoviev and Kamenev. Trotsky grew further arrogant and made no attempt to gain support and he slowly slipped from the favourite heir. ...read more.

However, the right decided on the idea of 'Socialism in one country' that viewed internal control was more important. The defeat of the Left The defeat of the left was not a difficult task as internal affairs proved the defeat of the left. Trotsky had bad relations between Zineviev and Kamenev and this caused them to help each other organise support and this caused the group to dissolve and tried to make fractionism. Stalin used his power to prevent them from making speeches and eventually by 1926; they were not allowed to speak about political views. The defeat of the right The defeat if the left caused a heated rivalry between the powers that was left to take power. Stalin announced his new five-year plan that would brace Russia into a huge industrial recovery. In 1928, and the defeat of the left, caused the new right opposition party to debate on the future of industry. However, Stalin in this debate seemed to disagree with the policy, as it did not focus on the socialism in one country. After the defeat of the left he used the ideas of abandoning NEP and start a new economic policy. This now annoyed Bukharin and was finally removed by the strong supporters of Stalin within the party. Stalin's strong power block now managed to remove Rykov and Tomsky by party support and ended any threat to the leadership of the soviet union. ...read more.