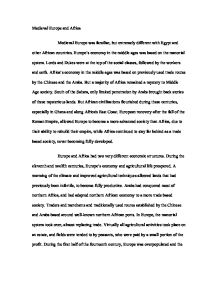 Medieval Europe was familiar, but extremely different with Egypt and other African countries. Europe’s economy in the middle ages was based on the manorial system. Lords and Dukes were at the top of the social classes, followed by the workers and serfs. Africa’s economy in the middle ages was based on previously used trade routes by the Chinese and the Arabs. But a majority of Africa remained a mystery to Middle Age society. South of the Sahara, only limited penetration by Arabs brought back stories of these mysterious lands. But African civilizations flourished during these centuries, especially in Ghana and along Africa's East Coast. European recovery after the fall of the Roman Empire, allowed Europe to become a more advanced society than Africa, due to their ability to rebuild their empire, while Africa continued to stay far behind as a trade based society, never becoming fully developed.

Europe and Africa had two very different economic structures. During the eleventh and twelfth centuries, Europe’s economy and agricultural life prospered. A warming of the climate and improved agricultural techniques allowed lands that had previously been infertile, to become fully productive. Arabs had conquered most of northern Africa, and had adapted northern African economy to a more trade based society. Traders and merchants and traditionally used routes established by the Chinese and Arabs based around well-known northern African ports. In Europe, the manorial system took over, almost replacing trade. Virtually all agricultural activities took place on an estate, and fields were tended to by peasants, who were paid by a small portion of the profit. During the first half of the fourteenth century, Europe was overpopulated and the agricultural enterprises of northern Europe had reached the limits of their productivity. This promoted more trade, and trade routes throughout the Mediterranean area were re-established. During this period, African colonies began to flourish. A string of dynastic states stretched across the sub-saharan savannah from the western coast to central Sudan. These states were connected through trade and commerce. Ghana, one of the most powerful states, declined, and was succeded by the Mali Empire, which stretched over most of Sudan. This empire had many profound cultural influences on West Africa, allowing the spread of its language, laws and customs along the Niger River. This empire adopted Muslim customs, and was different from Europe because Christianity was the religion in Europe, and because it contained three large gold mines, yet no standardized form of currency. This made Mali organized as having staging posts in long-distance caravan trade. Europe was organized as more of a trade center, attracting trade from various regions across the extent of Europe. Africa and Europe did have similar needs for gold. The abundant supply of gold in Mali attracted Europeans into Africa, therefore leaving European styles and culture in major cities, such as Timbuktu, and the Saharan town in Mali.

The social structures of Africa contrasted with those of Europe because the African social class was constructed in villages, with elders having more control of economic functions. In Europe, the social structure was an aristocracy, consisting of kings, dukes, nobles, and counts who had extensive landholdings and considerable political influence. Also peasants worked on the estates and manors of these aristocrats, while they were economically and physically bound to their lord. In Africa, the markets, in their cities, were the center for social activities. The relationship between the merchant class, and the ruler, differed between Africa and Europe. In Europe, the royal family and the ruler were isolated from the rest of the society, but in Africa, the ruler would often hold meetings with the merchant class, so they can speak their concerns and issues. But he also had to share some power with the wealthy merchants, much like in Europe, where dukes and nobles could influence the king. In Europe, there were also universities, which produced educated and trained individuals. The renaissance also showed the strong social structure of Europe because it shows how Europe encompassed the revival of learning based on classical sources, the development of different perspectives in painting, and the gradual but widespread educational reform. There was no form of formal education in Africa, disabling them to flourish as a society.

Europe was a more developed society than Africa due to their stronger economic structure, and their advanced social construction. Their economy proved to be strong after their recovery after the fall of the Roman Empire, and their social customs advanced due the occurrence of the Renaissance. Africa had no formal form of education, resulting in the struggle to form into an advanced society. Africa was trade-based, making them not be able to develop their own strong economic structure, therefore leaving them less advanced than Europe.