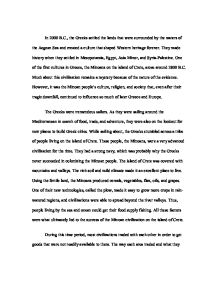 Minoan Society. One of the first cultures in Greece, the Minoans on the island of Crete, arose around 2800 B.C. Much about this civilization remains a mystery because of the nature of the evidence.

In 2000 B.C., the Greeks settled the lands that were surrounded by the waters of the Aegean Sea and created a culture that shaped Western heritage forever. They made history when they settled in Mesopotamia, Egypt, Asia Minor, and Syria-Palestine. One of the first cultures in Greece, the Minoans on the island of Crete, arose around 2800 B.C. Much about this civilization remains a mystery because of the nature of the evidence. However, it was the Minoan people’s culture, religion, and society that, even after their tragic downfall, continued to influence so much of later Greece and Europe.

The Greeks were tremendous sailors. As they were sailing around the Mediterranean in search of food, trade, and adventure, they were also on the lookout for new places to build Greek cities. While sailing about, the Greeks stumbled across a tribe of people living on the island of Crete. These people, the Minoans, were a very advanced civilization for the time. They had a strong navy, which was probably why the Greeks never succeeded in colonizing the Minoan people. The island of Crete was covered with mountains and valleys. The rich soil and mild climate made it an excellent place to live. Using the fertile land, the Minoans produced cereals, vegetables, flax, oils, and grapes. One of their new technologies, called the plow, made it easy to grow more crops in rain-watered regions, and civilizations were able to spread beyond the river valleys. Thus, people living by the sea and ocean could get their food supply fishing. All these factors were what ultimately led to the success of the Minoan civilization on the island of Crete.

During this time period, most civilizations traded with each other in order to get goods that were not readily available to them. The way each area traded and what they traded were different from place to place. Many historians and archaeologists believethat the Minoans were involved in the Bronze Age's important tin trade: tin, alloyed with copper from Cyprus, was used to make bronze, ceramics, copper, tin and dramatic luxury finds of gold and silver. Along with trade, the Minoans also had a very powerful army for their time and a large and powerful navy to secure their trade routes. Also, the even distribution of wealth in society resulted in unity and equality.

The Minoan religion focused on female gods, with females being dominant in society. Minoans were especially devoted to a mother goddess, which was evidence of peaceful life and strong matriarchal elements. The statues of priestesses in Minoan culture and frescoes, showing men and women participating in the same sports such as bull-leaping, lead some archaeologists to believe that men and women held equal social status. While the Egyptian painters of the time painted their wall paintings using the fresco technique, the Minoans utilized a "true" or "wet" painting method, allowing the pigments of metal and mineral oxides to bind well to the wall. The frescos included many depictions of people, with the genders distinguished by color: the men's skin was reddish-brown, the women's white. Along with painting, the Minoans were also fine metal craftsmen that excelled in making pottery as well. They made exquisite jewelry from gold and vases from soapstone. Out of the many art forms, frescoes were the main form of art, and are currently the best record archaeologists have of the Minoan civilization.

The decline of the Minoan civilization is said to have begun with a big disaster. Around 1700 BC, an earthquake hit Crete. During that time, much of the Minoan civilization was destroyed. Not long after they completely rebuilt, a dangerous volcanic eruption occurred nearby island of Thera, almost 70 miles north of the Cretan coast. The eruption was so strong that it created a tidal wave that flooded a lot of Crete, and the cloud of ash that came from the volcano ruined crops and buried a lot of the Minoan cities. This time around, the Minoan people disappeared. These people who inhabited the Aegean Sea region left only a small trace of their existence. However, the things they did leave behind truly help us picture their day-to-day life on the island of Crete.