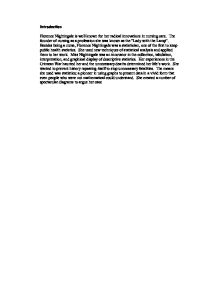 Florence Nightingale is well known for her radical innovations in nursing care.

Introduction Florence Nightingale is well known for her radical innovations in nursing care. The founder of nursing as a profession she was known as the "Lady with the Lamp". Besides being a nurse, Florence Nightingale was a statistician, one of the first to keep public health statistics. She used new techniques of statistical analysis and applied them to her work. Miss Nightingale was an innovator in the collection, tabulation, interpretation, and graphical display of descriptive statistics. Her experiences in the Crimean War haunted her and the unnecessary deaths determined her life's work. She wanted to prevent history repeating itself to stop unnecessary fatalities. The means she used was statistics; a pioneer in using graphs to present data in a vivid form that even people who were not mathematical could understand. She created a number of spectacular diagrams to argue her case Chapter 1 - Mathematical Education Florence Nightingale was born in Florence, Italy on May 12th, 1820. As a child Florence and her sister were educated at home by their father, William Edward Nightingale. During Victorian times women of Nightingale's class did not attend University and did not engage in professional careers. As a female her purpose in life was to marry and to have a family. As William Nightingale had no sons he turned his attention to his daughters and educated them. Florence and her sister Panthenope both were taught Italian, Latin, Greek, History and Mathematics [13]. Since her early years Florence was often to be found deep in the study of mathematics. At the age of seventeen social statistics became a popular subject for educated conversation. This encouraged her to compile statistics during her family's travels in Europe. She had kept detailed accounts of each day's journeys, miles covered and times of arrival and departure [12]. When Florence Nightingale was twenty years old she begged her parents to allow her to study mathematics. ...read more.

Chapter 4 - Miss Nightingales Diagrams Now that we have been introduced to Miss Nightingale's publications let us now look in more detail at the ways she represented her data. First by looking at her "Lines" diagrams [see Appendix 1, 2, 3 and 7]. The purpose of these were to make the point that soldiers of the British Army, the fittest men in the population, were dying during peace time at a much higher rate then the men of comparable age who were civilians [4]. "Lines" was one of Miss Nightingale's own inventions, a highly original bar chart; it has a repetitive style which emphasizes the point. There are a number of interesting overtones in these diagrams but they may just be by chance. First the title "Lines" is written in elaborate script, this invites the idea that these diagrams can be likened to a poem. It has multiple pairs of red and black bars, even though the message is clear from one repetition; these are similar to a chorus. The chorus effect is amplified by words at the end of each line; these make it sound like a funeral march [18] Looking specifically at Diagram (A) [see Appendix 1] it has four sets of lines of different lengths. The black lines correspond to the "deaths annually to one thousand living" in the civil population between the ages of twenty and forty. The red lines show the same but for guards. There is an obvious difference between red and black lines. Although these results seem somewhat conclusive it is not quite as it seems, the black lines show all deaths in the civil population, but the red lines do not show all deaths which occur in the army. Every year guards who are ill are rendered unfit to serve from "organic" diseases and are left to die as civilians. These then reduces the length of the red lines and are added on to the black lines [4]. ...read more.

With help from Dr Farr, Miss Nightingale designed a standard consistent medical form for each patient [see Appendix 13] [7]. She believed that the development of these forms, with proper analysis of accurate statistics could help identify the best treatment. She had the form privately printed in 1859 and circulated them around the hospitals in London and Paris. The form was approved at the international Congress of Statistics in 1861. Although the form itself was a good idea, it was never put into general use as it was too complicated. Next Miss Nightingale turned her attention to the possibilities of an extension of the scope of the census of 1861. She thought that adding a few extra medical questions to the census was an excellent way of collecting data [1]. There were two specific ways that she wanted to extend the reach of the questions. One was to count the numbers of sick and infirm on the census day and the second was to include all information on the social and sanitary conditions of people by including questions about housing [3]. These had both already been done in Ireland. With no persuasion Dr Farr was only too happy to help. The government rejected the proposal, Miss Nightingale's suggestions were out voted in both houses, it was thought the questions were too intimate and would give inaccurate results [2]. For many years of her life Miss Nightingale was confined to bed, due to an illness she had contracted in the Crimea. With money from the Nightingale fund, she was able to open the 'Nightingale Training School for Nurses'. From the foundation of this school Miss Nightingale had achieved a transformation in nursing from its former ill repute, into a responsible and decent career. Florence Nightingale died on the thirteenth of August 1910 at the age of ninety. In honour of the contribution Florence Nightingale had made to the Crimean War and to the health to the Army 'A Crimean Monument' was erected in Waterloo Palace, London, in 1915. ...read more.