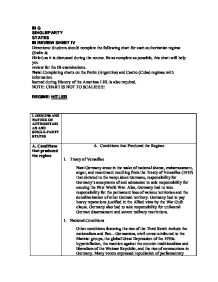 IB G SINGLEPARTY STATES IB REVIEW SHEET IV Directions: Students should complete the following chart for each authoritarian regime (Stalin & Hitler) as it is discussed during the course. Be as complete as possible, this chart will help you review for the IB examinations. Note: Completing charts on the Per�n (Argentina) and Castro (Cuba) regimes with information learned during History of the Americas I HL is also required. NOTE: CHART IS NOT TO SCALE!!!!!! REGIME: HITLER I. ORIGINS AND NATURE OF AUTHORITARIAN AND SINGLE-PARTY STATES A. Conditions that produced the regime A. Conditions that Produced the Regime 1. Treaty of Versailles n**i Germany arose in the wake of national shame, embarrassment, anger, and resentment resulting from the Treaty of Versailles (1919) that dictated to the vanquished Germans, responsibility for Germany's acceptance of and admission to sole responsibility for causing the First World War. Also, Germany had to take responsibility for the permanent loss of various territories and the demilitarization of other German territory. Germany had to pay heavy reparations justified in the Allied view by the War Guilt clause. Germany also had to take responsibility for unilateral German disarmament and severe military restrictions. 1. National Conditions Other conditions fostering the rise of the Third Reich include the nationalism and Pan-Germanism, civil unrest attributed to the Marxist groups, the global Great Depression of the 1930s. hyperinflation, the reaction against the counter-traditionalism and liberalism of the Weimar Republic, and the rise of communism in Germany. Many voters expressed repudiation of parliamentary democracy, which seemed incapable of keeping a government. These same voters began to support the right-wing and far left-wing political parties. The Nazis promised strong, authoritarian government in lieu of the unproductive parliamentary republicanism. 1. The Situation in Bavaria Far-left revolutionaries, in early 1919, declared Bavaria a communist republic, creating a 'red' terror. Freikorps and army units in May 1919 kicked out the communists, killing hundreds in a 'white' terror. ...read more.

Hitler was ultimately in control of n**i Germany. He didn't/couldn't concern himself with everything. - in areas he considered vital he made the strategic decisions and subordinates hammered out the details. - he had an excellent memory and real firmness of purpose. n**i Germany a Police State The Schutzstaffel (SS) Formed in 1925 as an elite bodyguard of Hitler, was a minor section of the SA until Himmler became its leader in 1929. Himmler envisaged SS taking over the business of policing Germany. By 1936 al the police, including the Gestapo (Prussian secret police which was allowed to use torture to extract info and confessions) were unified under Himmler's control. Himmler determined that SS should be more than a security service - intended to become a racial elite = Germany's new nobility. Would-be SS recruits had to go before a Racial Selection Board which imposed strict criteria - Himmler accepted only Aryan specimens - tall, blond, blue-eyed, intelligent. SS men only allowed to marry women of good German blood Concentration Camps March 1933 Himmler est. the first concentration camp for political opponents at Dachau. - summer 1933 30,000 people had been taken into 'protective custody' w/out trial and w/out right of appeal. Dachau became the model camp - imposing a system intended to break the spirit of the inmates. Camp guards - men of SS death head units from 1936 - had total power Corporal punishment was routinely administered and barely-fed prisoners were expected to do hard physical labor. 1937 three main camps (Dachau, Sachsenhausen, Buchenwald) had few thousand communists, Jews, and non-desirables (beggars, criminals, homosexuals) Takeover of Austria = increase in arrest - 1939 25,000 prisoners and three new camps (Flossenburg, Mauthausen, Ravensbruck) The extent of the Terror Terror is the most effective instrument - Hitler His regime repressed its enemies with thoroughness and brutality Exaggerate extent of n**i terror prior 1939 - 1. ...read more.

There were anti-semitic measures taken by local authorities, professional organizations, and the press. Nazis hoped to encourage Jews to emigrate by making life more difficult. Jews were reluctant to leave and could not take their assets out of GR, and few countries were willing to accept them. Then in 1935, another law prohibited a marriage if either party suffered from a mental derangement or had hereditary disease On September 1935 Hitler introduced two laws at the annual Nuremberg rally: 1. Marriage and s****l relations between Jews and Germans were prohibited and 2. Jews lost their German citizenship In 1937 there were three main concentration camps Dachau, Sachsenhausen, and Buchenwald. Each had a few thousand communists, jews, and asocials (beggars, criminals, homosexuals) Then in 1937, Goering began issuing decrees which shut down a variety of Jewish businesses. The hardening of anti-semitic activity was accelerated by the takeover of Austria in march 1938 where they beat up and humiliated 200,000 Austria Jews, as well as looted their homes and business. On January 1, 1939, Jews were forbidden to undertake any form of independent business activity, and banned from visiting theaters, cinemas, concerts, and circuses. In Kristallnacht, the night of broken glass, a German official in Paris was shot by a Polish Jew on November 7,1938. Then on November 9 ,1938, Goebbels delivered a bitter attack on the Jews and called for the official's death to be avenged. From November 9-10 (kristallnacht) 8,000 jewish business were destroyed, 200 synagogues burned, hundreds of Jews beaten and over 90 killed. 30,000 were sent to concentration camps, but realeased after agreeing to leave GR. Women's Role They were encouraged to leave work to marry and bear children. Abortion was prohibited, access to contraception restricted and financial incentives were given to encourage people to have children. Mothers who had large families were held in esteem and given an award, the mother's cross. To improve fertility women were encouraged to stop smoking and do sport. Hitler believed a women's place was at home. A number of employed women quit, leading to labour shortages. ...read more.