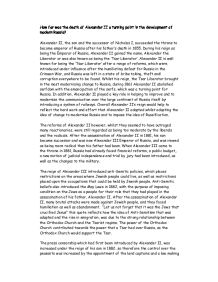 How far was the death of Alexander II a turning point in the development of modern Russia?

How far was the death of Alexander II a turning point in the development of modern Russia? Alexander II, the son and the successor of Nicholas I, succeeded the throne to become emperor of Russia after his father's death in 1855. During his reign as being the Emperor of Russia, Alexander II gained the name, Alexander the Liberator or was also known as being the 'Tsar Liberator'. Alexander II is well known for being the 'Tsar Liberator' after a range of reforms, which were introduced under influence after the humiliating defeat for Russia in the Crimean War, and Russia was left in a state of bribe taking, theft and corruption everywhere to be found. Whilst his reign, the Tsar Liberator brought in the most modernising change to Russia, during 1861 Alexander II abolished serfdom with the emancipation of the serfs, which was a turning point for Russia. In addition, Alexander II played a key role in helping to improve and to modernise the communication over the large continent of Russia itself by introducing a system of railways. Overall Alexander II's reign would help to reflect the hard work and effort that Alexander II adapted whilst adopting the idea of change to modernise Russia and to impose the idea of Russification. The reforms of Alexander II however, whilst they seemed to have outraged many reactionaries, were still regarded as being too moderate by the liberals and the radicals. ...read more.

In addition whilst the Emancipation of the Serfs was introduced as being the freedom of the Serfs, Alexander III still placed restrictions on this reform and therefore the Peasant independence was reduced. Restrictions were placed on Peasantry freedom in fear, to avoid the happenings of any revolts by the Peasants due to their freedom. To modernise Russia, the modern standards of the power of the Repression was not seen as being an overwhelming element, however instead the restrictions which were placed across the state were considered as being widespread. Writer, teachers, local councillors, peasants, Jews, Catholics, Protestants, Finns, Poles, Lithuanians, Ukrainians, Estonians, reformers, editors and students were all apart of the growing state control under Alexander III. These groups of people were seen as a disturbance towards the idea of Russification, and thus further the Bureaucracy, police and the army were to be dedicated to enforce religious, racial and national orthodoxy whilst Russia was an Orthodox country. To introduce the idea of Russification further, Alexander III introduced change towards the educational system. The idea of Russification, Alexander III's political ideal of a nation, which contained only one nationality, one language, one religion and only one form of administration, was successfully created. This was done by, imposing the Russian language as well as the Russian Schools on the German, Polish and all other nationalities present in Russia at the time who were not Russian. ...read more.

In addition to this, in conclusion, I believe that the Crimea War can be seen as being more significant towards the development of Russia, because it brought about different change, and the change which was reflected from the defeat and humilation that was suffered by Russia. Even though the changes which were brought about by the Crimea war by Alexander II, only lasted a short period of time before being slightly reveresed by Alexander III, they were more effective upon Russia, than the death of Alexander II, the reforms enforcer himself. Crimea had done reflect the weakness of Russia, especially the miliarty which was made up of peasants, which led to the Emancipation of the Serfs, even though thereafter this didn't help to improve the conditions of the peasants."These reforms improved the army, which was Alexander's goal, yet they failed to solve domestic problems. The emancipation didn't bring on any significant change in the condition of the peasants. In some regions it took peasants nearly 20 years to obtain their land. As Russia became more industrialised, larger, and far more complicated, the inadequacies of autocratic Tsarist rule became increasingly apparent". Overall Crimea War has more of an effect on the modernisation of Russia, than the death of Alexander II, because after the death of Alexander II, the modernisation reforms and strategies were reversed by his son Alexander III. ...read more.